You forget about these guys, then you see them again and you can’t help shaking your head.

Sunday morning at my local beachie was cold. The air temp was in the single digits and the water temp, which has provided solace of late from the icy sou-westers and the fierce winter air, had dropped considerably. I copped a piercing ice-cream headache on my first duck-dive. I shivered in between sets. I heard others whingeing around me and despite the booties I was wearing, despite the vest I had on under my steamer, I was jealous of those sporting hoods.

Then I saw him. A lone figure paddling out down the beach in a short-arm, copping a meaty south swell set on the noggin. I’d forgotten about these types. Blokes around me shook their heads. Two guys I regularly share the line-up with started discussing the particulars of the poor bugger’s situation and I tuned in to see if they could make head or tail of it.

‘Short-arms are usually only 2mm.’

Some waves rolled through and we scattered. The conversation was lost. But I kept an eye on the guy throughout the session. He stayed down on the southern bank away from everybody. His skills were rudimentary but you wouldn’t call him a kook. I saw him pull into a couple of four-foot closeouts and get absolutely flogged. His attitude towards the beatings seemed to be the same as his attitude towards the cold. He was out there, he was taking it on, he kept coming back for more.

Then after an hour or so we saw him walk back up the beach. The same two regulars were beside me again.

‘Old mate’s had enough,’ one observed.

‘Thank God,’ said the other. ‘He was making me cold just looking at him.’

Another set rolled in. We broke apart again, and when I looked back, old mate was gone.

But I kept thinking about him after he left. I thought what madness lurks among us? I thought what drives a man to such masochistic acts? Then, because I’m prone to such pondering, I tried to come up with a plausible explanation. Maybe he was from Tasmania? Maybe he had oversized genitalia and the only way to manage those things was to brave a session that’d cripple the rest of us? Maybe he was a genuinely hard dude, an SAS officer on hiatus from the field but still wanting to keep his edge? He probably cut firewood in thongs. He probably didn’t need firewood.

Then another set came through and I caught it in and had a hot shower and forgot all about him.

But far out he must’ve been cold. 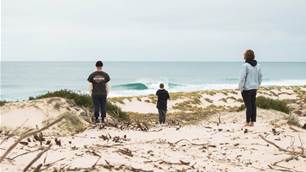 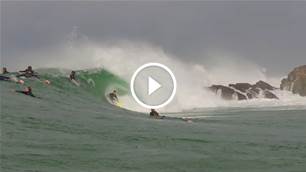 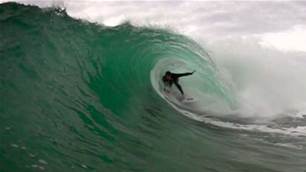