Mick Fanning has been bundled out of the Billabong Pro Tahiti after losing to Spaniard Aritz Aranburu this morning. Aritz got off to a quick start notching up two decent scores and controlled the heat while Mick looked completely out of rhythm with the ocean in his first event following his encounter at J-Bay.

“I was lucky enough that I got that good one at the beginning,” said Aritz after the win.

“Everything went my way because I got those two waves and there wasn’t much other scoring potential. Having Mick [Fanning] in my heat I knew that any mistake would cost me so I was just trying to play smart and it went well so I’m happy. This contest is a blessing and I’m just trying to make heats and enjoy it as much as I can.”

Had Mick secured the victory he would have reclaimed top position in the world title race. He is now likely to drop from No. 2 on the world rankings.

Meanwhile Gabriel Medina and John John Florence stole the spotlight on day three producing arguably the heat of the year as Medina stole victory from the Hawaiian. The pair traded blows, dropping a total of six nine point rides before Medina secured one of the best waves of the event – a 9.73. Watch the recap here.

“It was a really fun heat and a back-to-back battle,” said Florence after the loss.

“I keep getting these heats where I’m getting the highest scores but then don’t get it at the end, especially in Tahiti. I’m still feeling confident because I did everything I could. I’m sure it will go my way soon and I’m excited for when that happens.”

But it was Jeep yellow leader jersey and world number one Adriano de Souza that had the darkest of days going down to countryman Bruno Santos in a (mostly) one sided battle.

Santos won the Billabong Pro Tahiti back in ’08 and is no stranger to thick, hulking lefts in the Pacific. He skittled de Souza’s world title campaign with superior wave selection, patience and positioning in the tube.

For ADS it’s all too familiar territory having watched a world title campaign unravel before. Coming into this event the Brazilian was holding onto a pair of throwaway 13ths and couldn’t afford another early round exit.

Meanwhile and hot on his heels, former world number one, Filipe Toledo advanced after a win against Brett Simpson along with Owen Wright who defeated Dusty Payne with a pair of nine point rides. Filipe and Owen are currently ranked fourth and fifth respectively on the world rankings and are now well and truly in the world title conversation.

And you can never count out the King. He's yet to surf his do-or-die heat against Seabass and it's most certainly now or never for KS should he want to go out in style. Meanwhile Julian’s mental fortitude will be tested against a dangerous CJ Hobgood as he continues to build momentum towards that elusive world title. 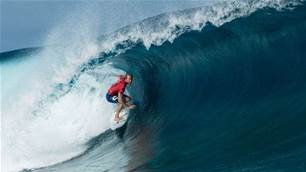