Kai Lenny and the Nazare Tow Challenge have combined to open a new chapter in high performance big wave surfing.

Just a few months ago we chronicled the rebirth of tow surfing. For the last few years surfing with a rope had become decidedly unripe. “Laird Hamilton was suddenly about as cool as your dad turning up to a school dance, with a cooked casserole, a hand knitted cardigan and a pack of condoms,” we wrote last October. Eddie Wouldn’t Tow had became a war cry for a new generation that wanted to surf, or at least watch surfing, by paddle power alone.
Yet in the past few months tow surfing has definitely had a renaissance. Kai Lenny is largely responsible, and the Nazare Tow Challenge, despite its almost gruesome ending, further cemented its appeal.
“I’ve fallen back in love with tow,” said the 3X Big Wave World Champion, Grant “Twiggy” Baker after he had competed at Nazare. “The speed and the adrenalin from banking around one of the Nazare monsters is indescribable. I’m hooked again.”
“I think we are seeing a merging of the two disciplines,” said Portuguese legend Joao de Macedo. “All big wave paddle surfers need jetskis for safety and the more everyone is capable of surfing and driving in huge waves, the better the progression will be.”
“I’ve obviously pushed the paddle scene at Jaws,” said Ian Walsh. “But having come to Nazare and surfed with Kai, he’s opened my eyes. There is a lot to learn. The baseline is now and I’m excited to see where it could go.”
Kai Lenny, whose tow surfing at Jaws and here in Nazare, has fuelled the tow comeback more than anyone, had a more simple take. “If you want to surf giant Nazare than you need to tow,” he told the WSL. “And with tiny boards and massive waves, there’s so much we haven’t done. We are just scratching the surface of what is possible.
His scratching however has been deeper than most. When it came to pushing the limits, no one is coming close to the Hawaiian presently. Now that doesn’t come without risk. The day before the Nazare event event Lenny was hit in the chest by a ski in an incident that led to two of the machines being totalled. On the day of competition one of his trademark 360 spins led to a massive airdrop that quickly spiralled into him cartwheeling down the face of a 50-foot wave.
Yet no individual surfer caught more waves at Nazare this whole week (after the competition finished he returned for another session with Ian Walsh and was first out the following day), and no surfer sent a surge of electricity through the spectators whenever he took off.
He showed that we may need jetskis and tiny, narrow, carbon laced boards if we really want to progress the high performance aspect of big wave surfing. 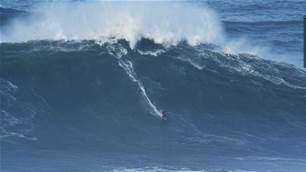