Salt water runs through Emily Brugman’s veins. Growing up on the NSW South Coast, the emerging writer was catching waves with her brother from the age of 10. Her grandfather, a Finnish migrant, worked as a fisherman on the Houtman Abrolhos archipelago, 60km off Geraldton WA, in the 1950s and 60s. Emily’s writing reflects these experiences.

“You slowly find what you’re interested in. I grew up surfing so that was a natural direction for me to take,” said Emily who until recently had a regular column, Curious Species, in the surfing magazine Tracks.

“The ocean features strongly in my current fiction project. Because of my family background and my upbringing, I like to write about those wild landscapes. I start with the ocean or surfing then the story focuses on the people around that.”

Emily was one of four young writers – all female – nominated for this year’s Vogel Literary Award, Australia’s richest prize for an unpublished manuscript by a writer under the age of 35.

The Vogel has launched the careers of novelists Tim Winton, Kate Grenville, Danielle Wood, Gillian Mears, Andrew McGahan and Rohan Wilson since its inception in 1980.

While Emily didn’t win (that honour went to Katherine Kruimink), she is now a Vogel shortlister, an exclusive club that opens doors. 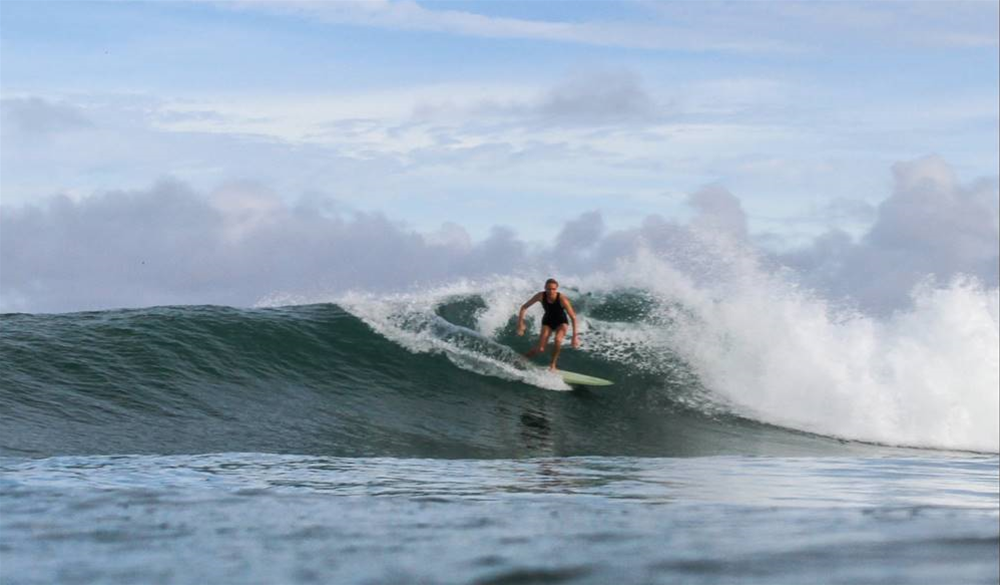 Emily Brugman has a nice style on the page and in the water.

Particularly so when 2019 was the third time in the Vogel’s 40-year history that the judges declined to award the prize because they were unable to find a manuscript that lived up to standards.

Emily has a secured a separate publishing deal with Allen & Unwin because of the shortlisting.

“I’ve known for a while about the shortlisting and about my publishing deal. You spend all this time and all these years writing and not knowing if it’s ever going to see the light of day and then to find out it is good enough, it’s such a confidence boost.

The manuscript, a fictional collection of interconnected short stories inspired by the life of her grandfather and other fishers on the Abrolhos, has been five years in the making. The work emerged during Emily’s Honours year at Southern Cross University.

At the same time, Emily is writing a long form essay, commissioned by Fremantle Press, for an anthology of surf and ocean writing. She is one of six writers – three female, three male – selected for the book to be published in 2021.

“My essay is a series of interviews with people who’ve had extraordinary experiences with the sea. Women ocean swimmers who’ve been swimming at Byron Bay for more than 20 years, a sailor who had a pretty frightening experience in the disastrous 1998 Sydney to Hobart, and a surfing couple where he got into trouble and she saved his life.”

Emily relocated from Sydney to Byron Bay in 2016 to enrol in Southern Cross University’s Bachelor of Arts with Honours after studying writing and cultural studies at UTS.

“I wanted to spend some time immersed in writing and I thought the best way to do that was an Honours year,” she said.

“It proved valuable. My work was still in its infancy. A thesis of that size, 20,000 words -- 15,000 creative and 5000 theory -- was a good start to explore what I could do with that idea of writing a novel. Honours was a perfect introduction to a big project that’s not so big that it’s daunting to begin.”

Her Honours supervisor was Dr Lynda Hawryluk, the University’s creative writing course coordinator and member of the Byron Writers Festival board who introduced Emily to the BWF team after graduation.

Emily has been working at the Byron Writers Festival organisation since 2018 as Festival Administrator responsible for its Schools Days initiative and ticketing. The exposure to the literary world – writers, events, workshops, mentorships, writing grant applications and more – is invaluable and a source of inspiration and motivation.

“It’s a great job," she said. "Recently I’ve been involved in some aspects of the programming for the next Byron Writers Festival itself which has been really exciting. We’re looking at including debut and younger authors to appeal to a younger crowd and I’ve been concentrating on that. I’ve been reading lots and lots of books, brainstorming themes and coming up with ideas for panels. The BWF team seems to value my perspective. It feels good.” 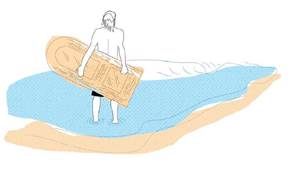 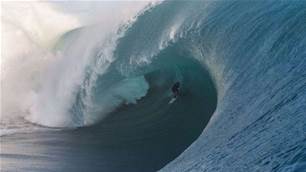 The Day Keala Kennelly Made Surfing History At Teahupo'o 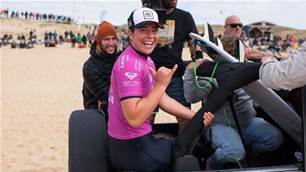