There is a whole lot about to happen with the WSL Big Wave athletes and the Big Wave Tour. The three-event tour ends on March 31, and the Big Wave Awards entry period cuts off on 20th March, a short list is announced at the end of March, and winners are announced at a gala function in late April. Busy big wave times.

There are a whole bunch of incredible nominations for the Big Wave Awards here http://www.worldsurfleague.com/bigwaveawards and as we start the final countdown to the end of the season, with Mavericks still on the schedule as a possibility, Grant ‘Twiggy’ Baker still leads the pack.

With Mavericks possibly up next, let’s not forget that Twiggy is a two times world champion, as well as a two times event champion at Mavs, winning in 2006 and 2014. He knows the wave well and enjoys surfing and competing there.

“I love Mavericks,” said Twig to me recently. “The wave suits my surfing, and I’ve had a couple of good surfs out there this Winter so I’m happy with my preparation, but certainly not over confident. The new crop of top guys out there are next level, and the left has come into play on the smaller days so the wave itself is now evolving with the level of surfing.”

When it comes to life goals, what could be left for Twig at this stage, with his pedigree of achievements and accomplishments?

“They say you only remember an athlete if they win three of something so that’s in my goals for the next five years, to win another Mavericks event and another World Title,” said Twig. ”I think this would be a good achievement, as it’s one thing to win these events at home but a different story at a wave that’s not yours, where you have to flight for scraps in free surfs and mind your manners in the events.”

Then we have the Big Wave Awards, with his crazy ride at Jaws at the Pe’ahi Challenge going down as one of the sickest big wave rides of all time. Even though he never emerged out of the cavern, many have claimed it in superlative terms.

“I still get nervous thinking about that wave,” reckons Twig. “What if I had fallen on that drop? Was it survivable? Fuck man. That heat was so crazy and so intense. Billy and Alex had a mad wave each as well, and I believe all three were as heavy as paddle waves can get. Wind, period and size were at their maximum levels for me to commit on a wave, and I’m not sure how many more times I want to throw the dice like that.”

Over a year of some giant storms, incredible Nazaré sessions, two outrageous big wave events so far and a whole bunch of big wave surfs around the world, Twiggy has a couple of entries in the Big Wave Awards.

“There are so many crazy waves to compete against, but two waves stick out for me that I think could make the nomination cut,” reckons Twig. “My wave at Jaws, even though I didn’t quite complete it, is what the Big Wave Awards are all about and if they don't like that one, my wave from the West Coast (South Africa) is probably the best barrel I’ve ever had. Even though it's only 15-18ft, it's as square as you can get and almost 10 seconds long, so I’m always hopeful.” 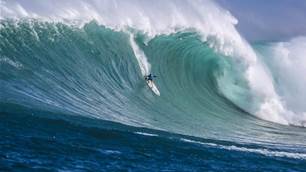