"This is the craziest moment I've ever been in." @italoferreira | Thankfully Italo is okay and ready for his Quarterfinal heat tomorrow #RipCurlPro #BellsBeach @ripcurl_aus - Watch Bells how you want and when you want on worldsurfleague.com. The all new WSL Replay experience puts you in control. Choose your starting point to watch your favorite surfers, excellent scoring waves or re-start the day.

In some of the most dramatic scenes witnessed for a surf contest in recent memory it was a crack crew of underground Vicco core lords that came to the fore as the day’s unsung heroes.

Led by former World Tour surfer and esteemed tube pig, Glyndon ‘Ringa’ Ringrose (who famously scored a perfect ten at Chopes despite being dropped in on by Jake Paterson), the Bells Beach water patrol team - which also included big wave legend Tony Ray as well as local rippers Byron Marsh and Cahill Bell-Warren - spent the entire day dodging rocks and weaving in and out of ten to 12 to 15 foot of relentless southern energy. We asked Ringa for the rundown on the luckiest escapes and anything else you couldn’t hear or see on the broadcast.

There were some near misses with some of the surfers. What was the full story with Italo?

That was a hard heat that one. We had Jeremy and Italo. The set before Italo got washed right in there, they’d both copped a big set, h snapped his leg rope, Jeremy broke his board. I didn’t pick up Italo to take him in, another guy picked him up. I went and picked up Jeremy and Jeremy was really upset, he was swearing and cursing and saying, ‘Why didn’t you pick me up first? I had priority. Don’t drop that bloke in there. I had priority, you should have picked me up.’

And I was going, ‘well, look, there’s a lot going on out here (laughter).’ If someone is swimming you can’t expect us not to pick ‘em up. If someone has half a board at least they’ve got a bit of buoyancy.

That was just the way it happened and we ran them in. Jeremy didn’t have his board there so he had to run up the hill and grab his spare board, run down, jump back on and we went out. The very next set that they caught, Jeremy caught the first one, Italo caught the second one. I went in because I knew how upset Jeremy was I went, ‘oh well, I’ll make sure I got look after Jeremy now.’ I went and picked up Jeremy meanwhile Italo catches the next one, the other ski driver came in.

A few of our ski drivers, there were two of us that were happy to go right in and pick up, myself and Byron Marsh. And the other guys were happy to come in but a little more tentative.

T (Tony) Ray came in to pick up Italo and then all of a sudden he just got sucked right across the button (rocks at Winkipop). I went across the button earlier with John John because John John got sucked over there. I could see there was a big enough wash and high enough tide that I had water to get across it to pick him up on the other side and get him out.

T Ray looked at it and went it’s my ski and he wasn’t too sure if there was enough water and he chose to go back the other way to Bells corner instead of going across the rocks to pick up Italo. I didn’t know what happened after that. I took Jeremy back out and when I came in I saw Italo on the back of the next ski screaming, holding on to Byron Marsh, and then I saw on the video…what’s he doing running along the beach? I presume he got washed across the rocks, he hit the beach, he climbed up around the rocks at Winkipop, ran back up the beach and finally got picked up. So he actually made his own way back from Winki and was running back up the beach making all sorts of hand gestures that ended up on Kook Slams or something (laughter).

Because we’re out in the water, we’re picking up the surfer we’re picking up, we’re getting them back out and hoping the other ski drivers are going to pick up and do the same thing but sometimes crew slip through the cracks, especially when it’s that big and that much going on. He just accidentally slipped through crack until we finally got onto him again and got him back out there.

Lucky he didn’t end up stuck in a crack…

Yeah, that’s right, 100%. I know if it was me and someone else had of picked up Jeremy I would have gone across and got him, just cos I’d already done it once with John John and I was confident to do it.

I was telling T Ray just go, you’ll be right, and T Ray was like, ‘ahhhhhhhhhh…’ and decided not to, which is fair enough. Better to be safe than sorry sometimes. I was hoping the other guys would come in on the Winki side of the button and pick him up cos I presume the other guys with skis were doing that but I had Jeremy and I got Jeremy back out there and dropped him in the lineup.

Then I saw Italo coming back out on the ski. He had Byron in a headlock holding onto his board, standing up screaming like he was having a great time. He had a full arm around hugging him standing on the back of the ski going, YEWWWWWWWWW! (laughter). He still ended up winning the heat, so I guess it would have been worst if he hadn’t won the heat. There was lots of dramas.

How heavy is that Winki area with that amount of swell pouring in?

It is, it all compounds on you. You get waves where you’ll go over quite easily but sometimes especially because it was getting a higher tide you get bigger white waters coming into the beach so you can’t run away as much.

If it’s lower a lot of the energy is lost when it breaks further out the back and you get smaller white water. I knew it was going to get dicey as the tide got higher and the swell was going to push in the afternoon. I was jumping one and a half story white waters type stuff and punching into it. As long as you turn and you’re prepped for it and front it and have enough acceleration to get through it without destroying yourself or destroying the ski that’s pretty much all you gotta do and hold on. 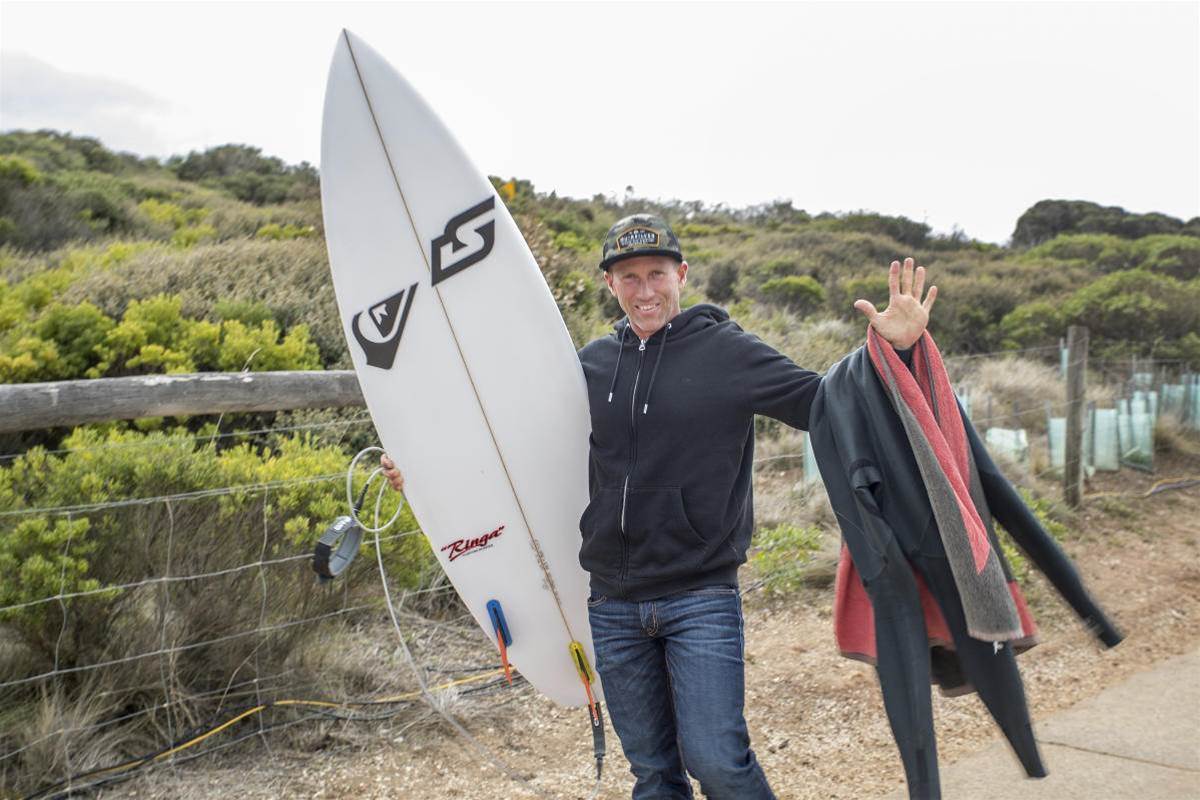 How heavy were the conditions on the big day?

I’ve been in conditions similar to that at Bells before on the skis. I’ve been doing it since 2003/4 so we’ve been in a lot of conditions like it. It was heavy but it wasn’t super gnarly, it was very challenging. There was a lot of water moving and a lot water pushing in and big white waters to get over if you were coming in. So it was big but we’ve got the speed and power to escape if we’re wise enough otherwise we’re washed up on the beach.

Far out it was entertaining, man. It was one of the best days of competitive surfing I’ve watched and the water patrol’s performance was definitely a highlight.

It was challenging but I was actually stoked, it was so much fun, I was buzzing the whole time, going, ‘Yeah, this is sick, let’s get in there.’

I had a moment when Filipe said to me, ‘Go, go, go,’ because there was a bit of a gap but I went, no, I’m not going there because it was senseless, I could have shot the gap, got there with too much air and there was a whole big set behind it that wasn’t worth it. So I just went na, na, na, no good, so I just went back up and we could go through smaller waves without being threatened of being knocked off.

What the surfers were saying to you on the back of the ski?

Some of them would scream at you, ‘Go, go, go!’ And I was like, ‘no no no, then okay, lets go hold on,’ when it was right. Slater was really good, he was having a good chat. And I put it in an instagram, I apologised to him because he did have a few heats where things did go wrong with skis, little mishaps that probably could have maybe not have happened. But he was quite gracious about it. He understands that there is an ocean to deal with and sometimes those things happen.