In 2017 at the Corona Open JBay, 10-point rides were dropping all over the place. Filipe in round 2, Jordy and a 20-pointer in round 3, and John-John in round 4; Filipe and Frederico Morais in the quarters. It was the year that ‘raining tens’ was the most used phrase by commentators, and it was also around this time that the WSL started reviewing the 10-point criteria and having long, hard stares at head judge Richie Porta. A few short months later, he was gone, the system slightly recalibrated, and the perfect ride was suddenly a lot harder to attain.

In round four, Jordy was up against Filipe and Julian, and it was a doozy of a heat. Filipe banged home a 10-point ride, and then a shark was spotted moving up the point from the Albatross section. It eventually cruised through the line-up, all the while being monitored by the drones. The contest was put on hold until the shark, a decent-sized but slow-moving white shark, had headed off to the deep. By the time they got back in the water, Jordy was out of rhythm, and could not contest the Brazilian’s scores in conditions that suited him perfectly.

Then, in round five, Jordy was up against Californian natural-footer Conner Coffin in waves at flawless Supertubes. Growing up surfing the perfect right-handers of Rincon, Coffin has a style that transfers seamlessly to Supertubes, but Jordy was dominant and took a big heat win. Still, in amongst the maelstrom of infinite perfect sets, the judges had missed one of Coffin’s rides. It was far down the point, beyond Impossibles and he was buried so deep in the barrel that no one saw it. Coffin’s crew, however, didn’t miss a thing. The ride was identified on the tape, and when the judges reviewed the ride, they realised that it could have made a difference to the heat score. 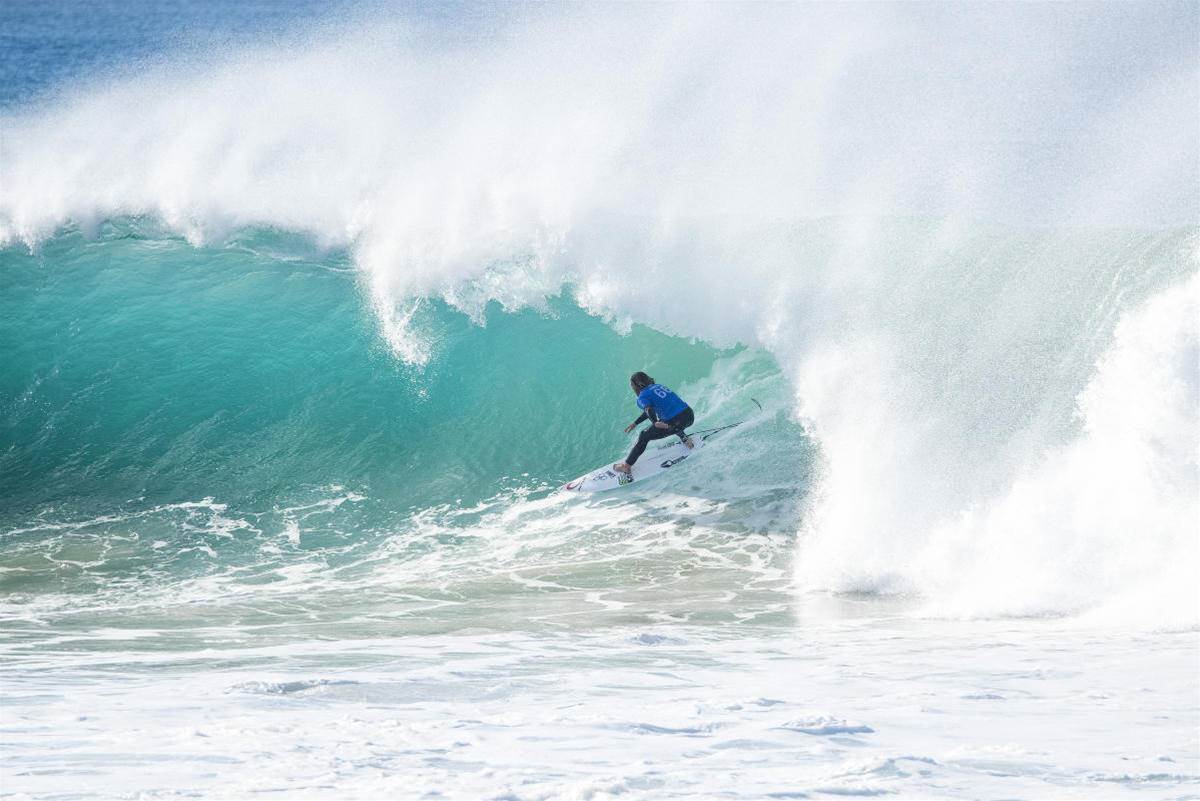 Conner Coffin looking for the doggy door exit on a wave that went well beyond the line of sight of the judges and inspired a resurf. Photo: WSL/ Cestari

It was a strange call, as it seemed to spectators that the wave itself was outside of the contest area. It was definitely out of the line of sight of the judges, but a re-surf was called; not surprisingly Jordy was livid. Resurfs generally suck.

Jordy was paddling the 300 meters of Supers like a wounded beast. He was angry, and it was making him fierce. When the big guy picked up the bomb, it looked like he was going to bang it for a tenner from the get-go. He did not disappoint.

Jordy found his rhythm, started gouging vicious hooks from the top section of the wave and came flying into the car park section. He continued to carve, smash and float, ending it with a barrel and a lookback claim. The deal was sealed. There was no doubt it was a 10-pointer, and the crowd all knew it long before it was announced.

Jordy was pumped. When the score was announced, he slapped the water, but there was no standard smile or gracious acknowledgment from the big guy. He just put his head down and continued paddling furiously up the point.

It was, however, his peak moment and he never got past his next heat.

It seemed the next day that he was tired and stiff, and showed less interest than when trying to prove a point against Coffin. It was a cold morning, and it was as if he had expended all his available contest energy in that resurf against Coffin, and there was nothing left to give.

On the morning of the final, he lost to Filipe, who went on to win the event.

But remember the 20-pointer?