The day Cheyne Horan dared to send MP in.

While watching a surfing competition on the internet recently I started thinking about what it takes for a professional surfer to break through and become a winner of competitions rather than just a high place getter. I also thought about the mindset it must take for a young surfer to surf against their heroes and what it must take to beat them. Later that day I happened to see Cheyne Horan getting out of the surf and after a quick catch-up chat, remembered that he had become famous as a grommet for being a “giant slayer”, so I asked him what it took, as well as when he realised he had really “made it” as a professional surfer and he told me a story he had never told
me before.

As Cheyne tells it: “Ever since I first started competing I loved playing mind games with my fellow competitors. One day, when I was about 16, I was in a heat of the Coke Surfabout in smallish surf at North Narrabeen with Michael Peterson and a few others. I had always had a good relationship with Michael. He was a really quiet and shy guy on the land but a fierce competitor, which I loved. He was always friendly toward me, appearing out of nowhere and standing alongside me while I was watching the surf and even telling me insane stories like the one about him and Owl Chapman’s drug-fuelled drive to Bells one time.

Later, I was in the toilet just finishing up at the urinal when MP appeared behind me and pushed me up against the wall. He had the craziest, angry look in his eye and I thought he was going to bash me. He was a lot taller than me and had big broad shoulders and he pinned me against the wall of the toilet block with one hand and gripped my stomach with his other hand and twisted hard, leaning in so that his face was only a few centimetres from mine and he paused for a while and then said, “Welcome to the big-time” and let go and turned and walked out. Even though I was shaken, that was when I knew I had really made it. When Michael Peterson told me I had!” 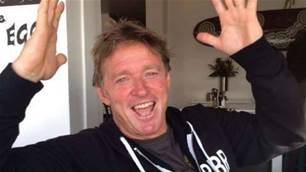 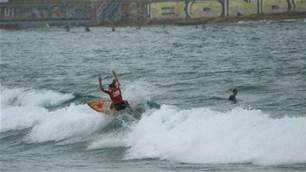 The Ultimate Boardriders After Party 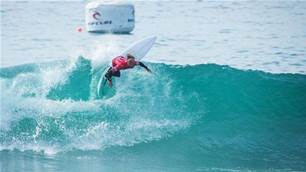