A few years ago Perth Standlick was knocking on the door of the WCT. His career best finish was 41st, placing him nine spots outside surfing’s elite realm at a time when the one world ranking system was in place. Put another way he was one good result off a WCT birth that would have equated to a major sponsorship payday, better waves and bona fide pro surfing status.

Now aged 27, the Bondi natural footer has taken a different route; pursuing a career as a chef, competing selectively and carving a reputation as an Ours specialist.

Below he discusses the disenchantment that comes with chasing the pro surfing dream, the financial realities of the WQS and what he loves about his new life.

Can you give us a ballpark figure on what you were making at the peak of your career with sponsorship and prize money combined?
I'm fairly certain it was about 90k but if you have money in that business it gets spent. The WQS is a cruel spender of anything you have haha.

When and how did you reach a decision to stop chasing the WCT dream?
I stopped enjoying surfing around 2015-16. Chasing the world’s worst waves around the world and spending every cent I earned sucked all the joy and love surfing originally gave me. I came home from a comp and straight into an amazing day at Ours and that was the turning point. I just thought, ‘This is what surfing is about, not what I'm doing.’

Was it hard to walk away?
Walking away from full time competing was very hard; even now I still think, ‘have I made the right decision?’. At the start of this year I did a few events, got a 3rd and then had a lot of good heats at the tag team. * Followed by Surfest and the Aus’ Open. The surf for those two events was out of control – wobbly fairly slow and annoying. I lost first round at Manly and that feeling of knowing I could've got the score if I could even get near a wave and not being able to get something took me straight back to the feeling I hated­ – pure anger. I wanted to put my fist through my board. I really struggled to hold myself back and not wrap my board round the nearest hard object haha.I got straight in my car and drove home. The whole way I couldn't stop telling myself. I'm so glad I'm not doing this all year.

*Perth was awarded ‘Surfer of the Event’ at the 2017 Australian Boardriders Battle. 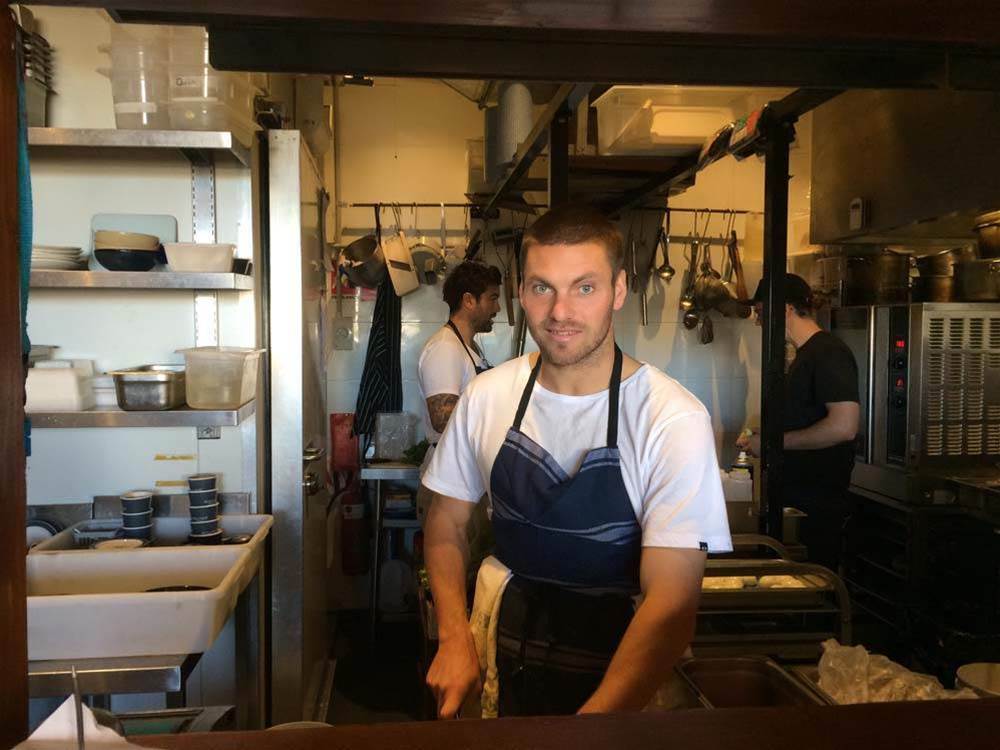 Perth plying a different trade at Porch and Parlour restaurant in Bondi.

I guess there is status and glory associated with being on tour, but is it also like leaving a group of friends?
Status is what you make of it. Some people strive for it. Others don't need it in their life. I mean it could make certain aspects of your life easier but then again. It's also very nice to just walk down the street and not say a word to any stranger and enjoy the company of the real friends you have. That's all you really need. The hardest part is not travelling, even now I’m still not that used to being home for such a long period. I might actually take a surf trip for me soon.

Did you ever think you would have to get a regular job? Was it hard to adapt after enjoying so much freedom?
Everyone's goal is to never get a real job, but that's playing your cards very well. I've always done bits and pieces of work. Two of my neighbours were chefs and another very close friend. I was always making meals with them and it was so fun. One of them said they needed someone for a week to just do all the small prep jobs to get them through the day so I said, ‘yeah’ I'll help you out.  Starting at 3:30am and finishing anywhere from 4-8:30pm six days a week was a wild reality check. Got out of that job after 5 months. Where I am now is great. It's enjoyable going to work. I work anywhere from 3-7 days at Porch and Parlour (at Nth Bondi). Usually try to base it around what the waves are doing. The boys give me a lot of flexibility.

What do you like about the new gig?
Basically always learning in the kitchen. Everyone has their own version of the same things techniques; strategies to make the day flow better etc. It's fairly similar to competitive surfing, except you get paid every week haha. Got to have very good time management and memory.

It seems like you are chasing big swells harder than ever and have become a regular at Ours?
I'm definitely chasing big swells more than I used to, not sure if it's because I can now or if I enjoy it more. I've always liked bigger surf, I just get to surf it more now.

I'm very lucky to have Ours right there; it's got to be one of the best waves in the world. It's got so many different versions of a barrel. You can get the most playful easy roll in or the scariest late drop, but both break in the same spot. It breaks when it's small and handles waves. that are not meant to be ridden.

You are on the invite list for Cape Fear. Is reinvention as a Big Wave surfer an option?
I don't think I'll go down that path of lunacy. I like being as calculated as possible. I would love to surf a lot of other big waves around the world but in my own time. Each wave needs a bit of dedication and study.

Then again if I was getting paid lots of money I'd probably surf waves that are just scary and not even fun haha.

Although you are working a pretty full roster, you still take time off to do selective WQS events. Have you let go of the WCT dream entirely and is a shot at it only ever one good result away?
There are events and places I like doing and want to go to. I may as well make some money will I'm there.

I have let that dream go. The world tour is 5 good results away.

What’s the sponsorship status now? Do you still get free boards from anyone?
I'm currently getting boards off DHD, which is mental. Blows me away how consistent the boards are. Especially the slab boards I'm getting done.