Julian, Filipe, Wade and John John walk into a warung.

Actually, there aren’t many warungs around Keramas any more, unless they’re for the modest local people to sleep in after they have finished cleaning the resort rooms. The rooms where the wealthy visiting surfers hang out when they’re not listening to Indo techno doeff-doeff music, drinking beer at the pool, and possibly urinating in the pool.

When Ben Mondy and I were there a few years ago we didn't drink beer, or get up to much mischief in the pool. Maybe it was because we were just two hard-working stiffs covering a great surfing event for our trusted Tracks fans and readers, or maybe it was because one (or two) of the two of us had smuggled some gin into the beachside bar somehow, and were mixing drinks so strong that our bodies went into shock as soon as we tasted them. Or maybe there were magic mushie omelets involved. There were many good times at the last event in Keramas. Ask my friend from South Africa. Let’s call him John. 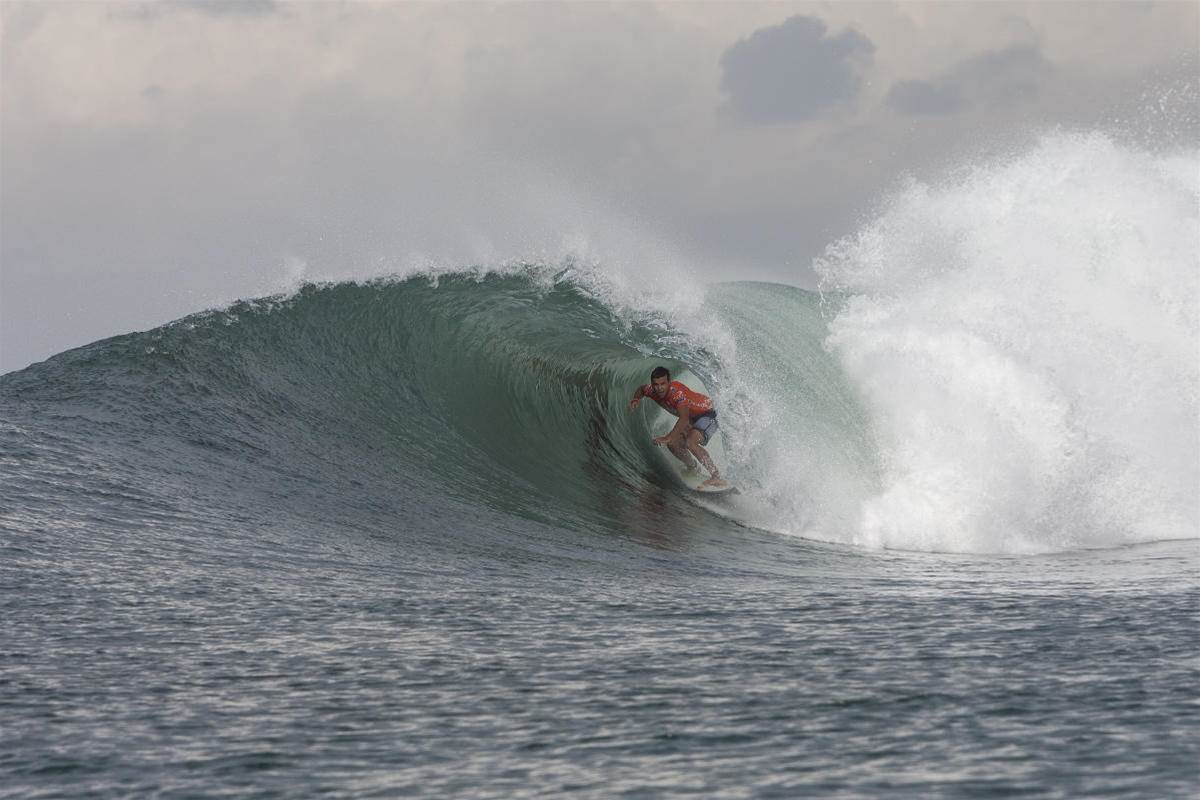 Julian Wilson will be looking to consolidate his lead on the Jeep leaderboard. Photo/ WSL

He met some girls the night of the final day of competition. Parko won the event. John got his car stuck in a muddy patch on the road. He and some mates ‘found’ a case of beers, right where the car got stuck. They got the car towed out, with the beers in it. John ended up at some wild after-party with all the pros, and it was a huge night. Woke up in the morning with some strange girl under his one arm and Taj Burrow’s event cheque for fifth place under his other arm. The bed, however, was covered in brown. It seemed like there was shit everywhere. He thought with horror that either he or the girl had poohed during the night. Turns out that the brown muck was just Indonesian mud from the car-towing incident.

That was a big night eh John? 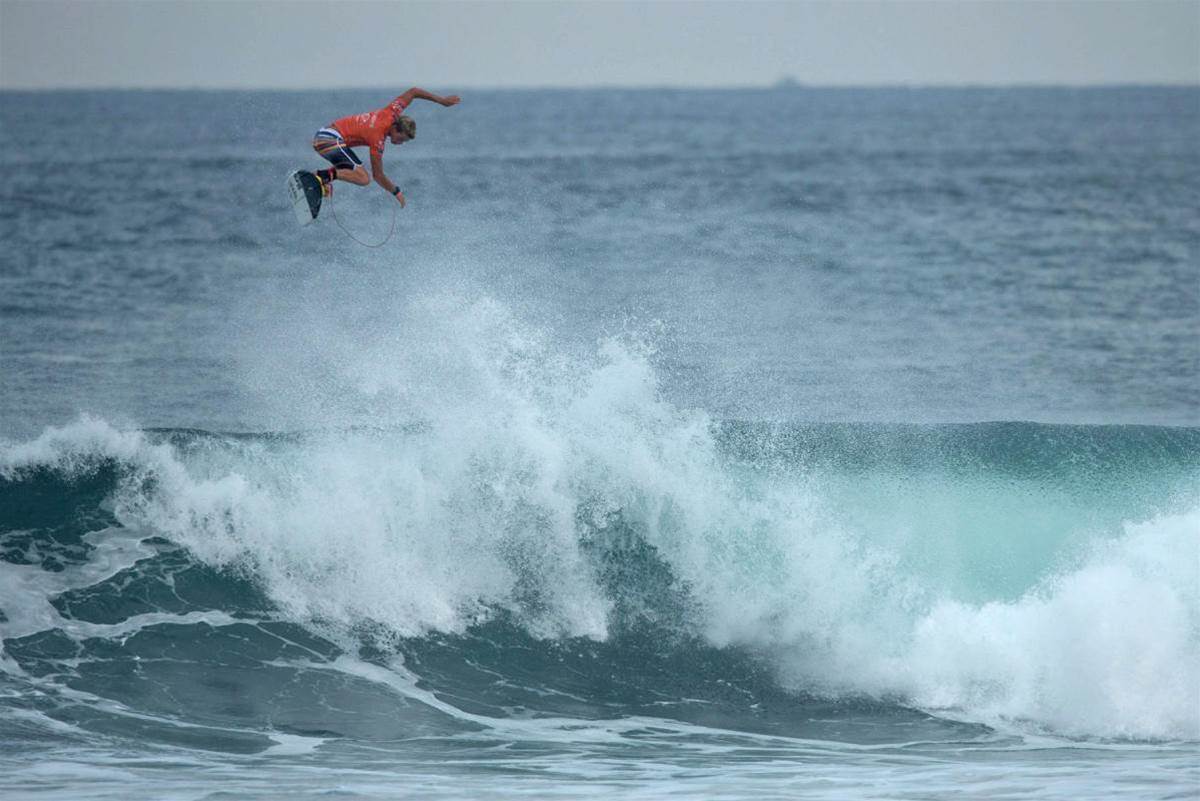 John John pulled off the biggest alley – oop ever seen to date at the 2013 event, scoring an unanimous 10-points.  Photo WSL/ Russ Hennings

The contest was amazing though. Keramas turned on, like never before. It was a new spot on the Championship Tour and no one knew what to expect. They got barrels, high performance rights, ramps galore, huge turns and excellent rides every day on the high tide. We watched aghast, Mondy and I, as the best surfers in the world went to town on one of the best right-handers on tour and the best right in Bali.

Except for Sanur, that is. Another world-class right in the hood, it turned on one day when the swell at Keramas maxed out. Every one went down to the reef pass to either surf, or have a look and sip on a refreshing Bintang, like myself and maybe Mondy. It was firing. Some local guy came out covered in blood. Looked like he had been bitten by hundreds of tiny sharks, with little bites over his whole body and just blood pissing everywhere. He told us that he pulled into a barrel, wiped out and got stuck in a coral cave. He couldn't find up, so he held breath and floated until he bumped into the roof of the cave and then scratched around until he found the gap. Sounded like another magic mushie story, but how else did he get all the cuts? 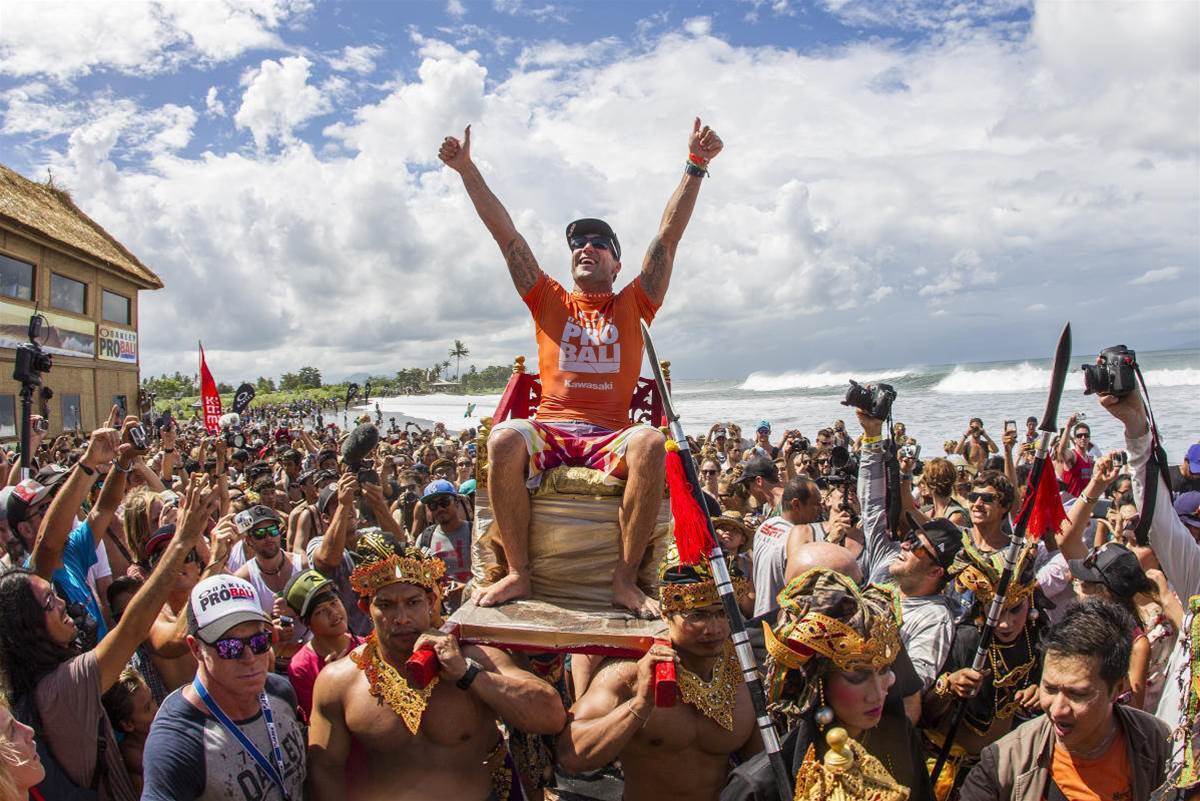 Joel Parkinson celebrating his victory at Keramas back in 2013. Photo/WSL

Keramas is a perfect wave, with a crazy backstory. It’s a story that makes many people unhappy though. The wave was secret for a long time, and it was really hard to get to. The roads were circuitous, to say the least, and no one was telling anyone about anything. It was a wet season wave, so while the world thought that there wasn't much happening in Bali, there were a few who would disappear into the unknown and get barreled all off-season without telling a soul. Then someone found it, and bought the land and partnered with a goofy footer, and they built a commercial techno resort and a surfside bar and restaurant, with expensive beers, just in time for the event in 2013. Before that however, let’s not forget that Billabong took their Pro Junior event to Keramas in 2009, and frothing groms from all over the world were shown the wave, while the rest of us were sent crazy video clips from that same event.

Parko found Keramas to his liking, scoring a 20-point heat as well as the event win.

It’s a hard one to quantify. We all love going to great waves to surf, but we’re all quick to criticize anyone who builds a resort or exploits a surf spot. Is Martin Daly guilty of what has happened in the Mentawais, or is he a saviour for showing all the surfers of the world some of the greatest Indonesian waves? Have you ever been to the Mentawais, been barreled off your head, and thought, ‘Thank God someone found these waves for us all to enjoy,” or do you think, ‘Who was the prick who revealed these spots to me and the rest of the world?’

The Corona Bali Protected runs from May 27 – June 9.