Will surfers continue to raise their voices?

Whichever side of the fence you sit on, there’s no denying that the Fight for the Bight movement saw surfers turn out to protest an environmental issue with more gusto than they had in decades. From Townsville to Tassie, from the Northern Territory to Norway and numerous points in between, surfers grabbed their boards and placards and showed up to their local beaches to remind everyone who might have forgotten that they could make some noise when they wanted to. It was a powerful reminder of how a disparate community of people could be mobilised in the name of a common cause. But with Equinor having now bailed on the project and those at the forefront of the fight claiming victory, it’s fair to ask if it’s the end of the road for the movement. Three separate oil giants have abandoned their plans to drill in the Bight and it’s unlikely another one will take up the challenge soon. Surely everyone can just go back to catching waves, right?

Not according to Sean Doherty, the well-known surf journo who, along with Heath Joske and Damien Cole, helped promote the Fight for the Bight among the surf community and rally up numbers at beaches around the country. As chuffed as he is with the outcome of the whole ordeal, he’s convinced Equinor’s withdrawal is the beginning, not the end.

‘As great as it’s been, it’d be a real waste if it just stopped here,’ he says. ‘There are a lot of issues to look at and things to improve.’

Doherty’s not just talking about around the Bight either. He believes those at the forefront of the movement - many of whom live in South Oz and were, therefore, taking on Equinor in their own backyards - are willing to take the fight wherever it’s needed.

‘It’s been a bit of a revelation for everyone,’ he says. ‘It’s gone past geographical boundaries and looking after your own little bit of the backyard. It does feel like a real collective with this and that there’s bigger problems and it’s going to take a lot of people to solve them.’

Aware of the criticism the movement has attracted - namely around the fact that surfers can be pretty heavy users of fossil fuels and fossil fuel byproducts - Doherty acknowledges there’s truth in the claims but believes it’s important not to confuse two separate issues.

‘The thing is there’s some big environmental things where personal behaviours do most of the heavy lifting. Like look at plastics, there’s one right there,’ he says. ‘It’s a bit different when you’re looking at things like energy policy and renewable energies and oil use, because you’re in a system that’s been engineered that way and it’s being protected to stay that way, even though common sense will tell you that it should be changing and it should be transitioning to something that’s a little more friendly to the future.’

But that doesn’t mean he’s not calling on people to pull their weight where they can.

‘It’s super true, we’re all hypocrites at certain levels, but you’ve got to turn the ship by degrees, you’re not going to turn it around overnight, and you’ve got to make an effort in your daily life,’ he says. ‘I can speak for myself, after investing so much energy in shutting this thing down then you really look back at your own behaviours. You think about where things are coming from, what’s made of what, and at least stay conscious of it.’

And while he admits the surfboard in its current incarnation remains a toxic and as yet unsolved problem, he believes the tens of thousands of surfers who turned out to protest around the country could influence the surf industry in other ways.

‘The real interesting thing will be to watch the next 12 to 24 months when they’ve had a visible look at how many people want change, I think you’ll see the market will react to that and there’ll be more effort going in to making lighter footprint clothes, wetties, boards, because the market’s got to drive it,’ he says. ‘And if they get 30, 50, 100,000 people paddle out, then there’s people that actually care about this stuff and they’ve got a visual representation that the market exists.’

But for now he’s focussed on keeping the momentum going and ensuring people understand just what the movement stands for.

‘Most of us are pretty practical people, we understand the practical nature of the world, and you’re not going to shut down gas and oil and coal overnight, but we’ve got to get out of it. Seriously, we can all see that and what we can see is there’s no transition happening,’ he says. ‘The paddle-outs were great because they had a really good spirit to them, they were cool and a really nice feeling to be among a crew that were out supporting something bigger than just catching a wave. It’s woken up a crew that hasn’t done a lot in terms of activism for 20 or 30 years. It’s going to be really interesting to see where it goes in the next couple of years.’ 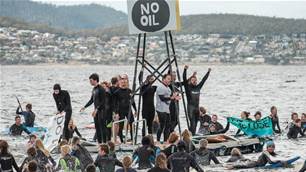