The week after Julian Wilson and Mick Fanning’s first instincts in a life-threatening situation were to save each other, it might be both bad taste and bad timing to lament a death in great surfing rivalries. I’m fairly sure that no one would want to see either Fanning or Wilson laughing like Dr Evil from the safety of the jetski as a fellow world title hopeful disappears from the face of earth in a pool of his own blood. However it is rivalries that elevate sport. They add depth, spite, performance and narrative. Think Ali and Foreman in boxing, Borg and McEnroe in tennis, Nicklaus and Watson in golf. Rivalries offer choice, with fans able to identify with differing personalities and opposing strengths and weaknesses.

Surfing has been full of them. As far back as the 1960s, Nat Young and David Nuuhiwa's wrestle for supremacy was bigger than the two surfers competing for a world title. It stood for America verse Australia and old school against new school. Brash, radical, and revolutionary grating against smooth, stylish and conservative. Throughout the 70s we had the master and apprentice rivalry of MP and Rabbit, which was followed by the competitive edge and opposing personalities of MR and Cheyne.

In the 80s though, Young and Nuuhiwa’s themes were re-ignited between Occy and Tom Curren. Curren was smooth, aloof and graceful. Occy was wild, exuberant and powerful. “We weren’t friends, but we weren’t enemies either,” Occy has said, “but when we put the contest singlets on we both knew we had to surf as good as we possibly could.” Their superhuman surfing and polar opposite approaches made surf fans choose their man, and the difference was like betting on a horse in a race, as opposed to just watching one. The losses hurt more, the wins were more joyous.

After Occ and Curren, Pottz and Gerr took up the mantle. This time though it was personal. This wasn’t symbolism, they just hated each other’s guts. The two had a running battle that featured an endless run of niggling, board stabbing, jersey tugging and paddle battling which eventually led to a physical confrontation in the water during competition. Last year when the two surfed a heritage heat, Gerr said afterwards, "Years after he and I quit the tour, we ended up talking about how much we hated each other, but how it drove us to be better surfers.”

The same could be said for the modern era’s greatest rivalry, Kelly Slater and Andy Irons. Until Andy arrived, Kelly Slater had a lock on supernatural talent and competitive smarts. Again it was the difference between the two personalities that fed their much hyped antagonism. In a tribute to Andy after his death in 2011, Kelly said, “I loved and hated the guy, but I probably only hated him because I admired and envied what he was capable of.”

Right now though it’s hard to find the hate, or even see where the hate is going to come from. This is partly down to the all too exemplary behaviour of recent world champions. Mick, again, here is the main culprit. Last year when he was the only surfer capable of taking out Gabriel Medina at Pipe, he was nothing but supportive to the young Brazilian, sharing his cereal and wisdom in equal measure. And while he is one of the fiercest competitors to ever wear a singlet, his respect towards Slater and best mate Parkinson means he has never been one to create a real, public, shoot-your-opponent-in-the-face-with-a-flame-thrower, rivalry.

In the modern era it looks like that might have to fall to Medina. He has the obvious once-in-a-generation talent that also comes with the crucial ability to divide opinion. As the face of the new Brazilian storm, he can also create fault lines based around dumb patriotism, a surfing rivalry key component.

Unfortunately, his potential rivals tend to lack his ruthless edge. We’ve seen Julian’s inner core, and that was all too brave and respectful. John John Florence has the fans and the surfing, but not the hardened personality type to engage in any type of proper antagonism. The surfing has never been better and the sportsmanship laudable, and yet I think we might have lost something in the process.

Someone, somewhere needs to follow the lead of Ken Bradshaw, whose big wave rivalry with Mark Foo was chronicled in the excellent book Stealing The Wave by Andy Martin. When asked by Martin if he was at war with Foo, Bradshaw replied, “I can't be at war with Mark Foo. If I wanted to go to war with somebody, they would cease to exist. I would win.” 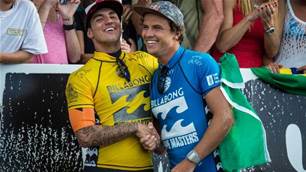 Where Have All The Rivalries Gone?