Pulling on the jersey for giant waves, in a time before leg-ropes and jet-ski assists.

When the Bells bowl started to pulse in the final few days of this year's Rip Curl Pro, the inevitable comparisons were made with the incredible monster surf of 1981, the year that Simon Anderson changed everything.

We’ll get to that in a minute, but older hands still on deck who were watching the huge lines wrapping around from Centreside and marching ominously past Rincon to unload on the bowl were thinking about a Bells contest of even more distant memory. Back in 1965, long before Tracks and even before Rip Curl was invented, so long ago that even the Bells Easter Classic, still the longest-running surfing comp in the world, was in its infancy, when your esteemed columnist was still in high school for fuck’s sake…yes, a long time ago…the cliffs at Bells shuddered with more oceanic force than the Boot Hill Gang and other longtime locals had ever seen or felt.

In my book Surfing Australia, I wrote: “The biggest-ever interstate contingent made the trip to the Bells Beach Easter Rally, overloading the Torquay caravan park and filling the pub with raucous young people determined to have a good time. It was Torquay’s first inkling that this surfing thing might become quite important to the town. The partying continued in the campground with surfing postponed on Good Friday due to lack of surf. When the Easter Rally got underway on Saturday, however, the swell was starting to build rapidly. Late in the day the sets were looming so large that the women’s and junior events were cancelled. It was going to get bigger, but no one could imagine how big.”

That Easter Sunday produced the biggest surf that many locals had ever seen, with twenty-foot sets pouring into the bay for the senior semi- finals, and several contestants nearly drowning as they were caught inside and swept around the point to Winki Pop. Jack Eden shot a famous photograph of one competitor lying on his board with his hands together in prayer as a monster set was about to crush him.

But contest director Tony Olsson and his ASA Victoria team stuck to their guns and sent the 10 finalists out in terrifying conditions. Nat Young, the fastest paddler in the group, made it over wave after mountainous wave but was still not out the back when the other finalists had to run up the creek bed that divides the beach to avoid the advancing white water. Eventually, a spotter up on the cliff whistled the all-clear and they were able to make it to the lineup.

The final lasted more than an hour, with local knowledge playing a big role and surfers like Jeff Watt and Rod Brooks taking heart-stopping drops. Eventually, however, it was Sydneysider Robert Conneeley, fresh from a season in Hawaii, who caught five good waves and took the title from Nat Young, with Jeff Watt third.

As a kid I remember cutting that famous picture out of Surfabout magazine and sticking it on my bedroom wall, wondering if I would ever have what it takes to ride such waves. The answer was no, but I was privileged to be there on the cliff when Simon Anderson made history 16 years later.

One day in October 1980, home on a break from the pro tour at a time when Mark Richards was dominating every event with his twin-fin swoops, Simon spotted shaper Frank Williams emerging from the surf at Narrabeen with a twin-fin board that had an additional small keel fin centred on the back. It wasn’t the first tri-fin board he had seen but it got him thinking about the extra stability that could be achieved. He went back to his shaping bay at Energy and started making himself a new board. What eventually became known as the ‘thruster’ incorporated Frank Williams’ basic idea (although Simon’s fin ended up being the same size) and Geoff McCoy’s ‘no-nose’ front-end design, but the particular unique combination of elements created a new benchmark in performance surfboards, one that continues to dominate surfboard design to this day.

The Simon Anderson thruster did not make its creator a fortune, nor was it immediately widely accepted as the design of the future. After being largely ignored at an American trade show booth devoted to the new design, Simon’s US collaborator, Gary MacNabb, told him: “You’re going to have to win a contest on it.” Simon took this advice to heart when the 1981 Australian tour began, but he was knocked out in the first round of the Stubbies in small, dribbly conditions at Burleigh Heads. On the long drive south for the Rip Curl Pro he prayed for surf, and his prayers were answered, and then some!

My successor as editor of Tracks, Paul Holmes and I drove down to Bells, but after a couple too many pub stops, we arrived just in the nick of time to see the bowl pumping and Simon unleashing a power attack the like of which had never been seen at the break. Finding an extra few metres of forward thrust out of his bottom turns, he snapped off the top of the massive waves and set up for a repeat performance.

The massive surf dropped off before the contest got to the pointy end, but Simon and his thruster were not to be denied in any conditions, eventually winning the event at Rincon from Cheyne Horan as we cheered him on from the rocks, guzzling champers from the bottle with the Narrabeen crew.

The thruster had arrived, and when Simon backed up by winning the Coke Surfabout in much smaller surf the following week, there was no question about its application in all conditions.

Will John-John versus Toledo in 2019 be remembered in the same way as those storied events? Maybe not, but it will take me a good while to forget Ryan Callinan’s explosive end-piece air drops. 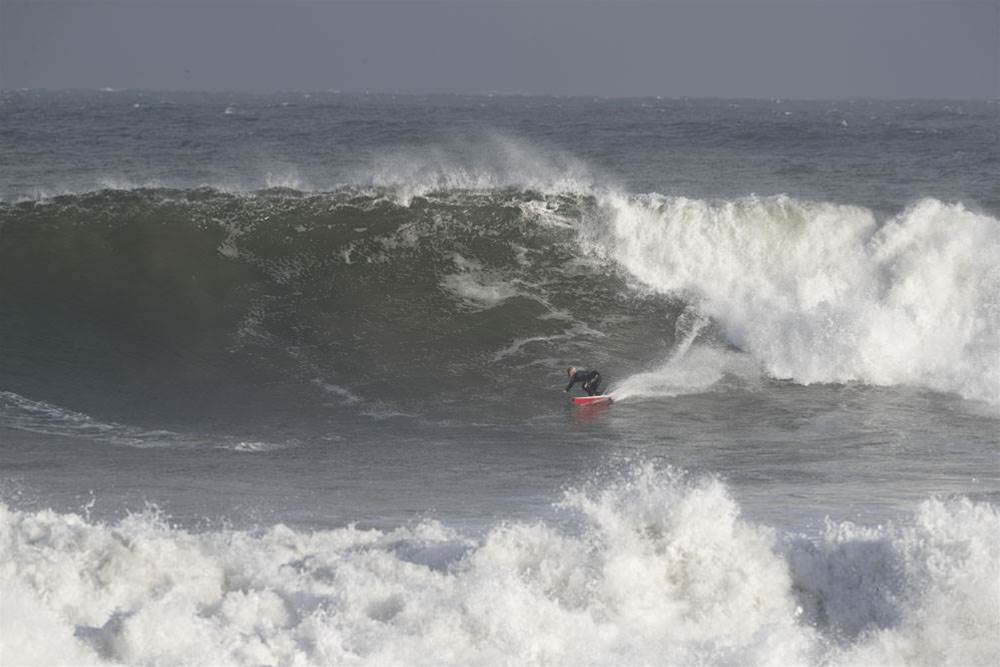 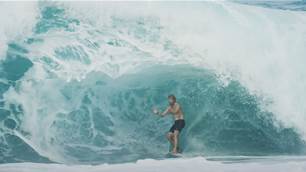 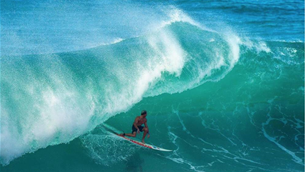