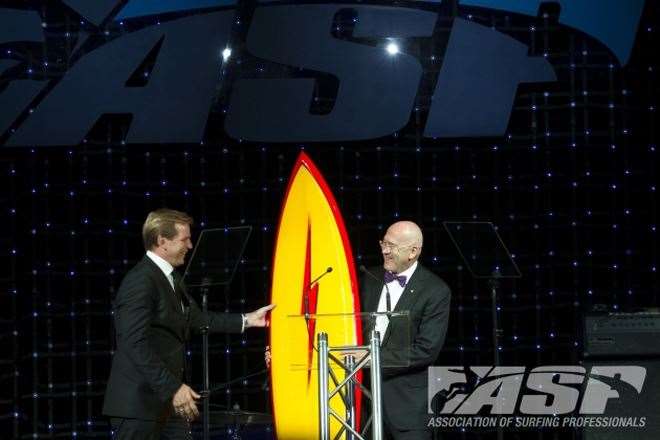 Hovering around the contest site at the Maragaret River Pro, I had the opportunity to talk with Paul Speaker, the ASP’s new CEO.

Since the announcement of ZoSea media’s takeover of the ASP, little has been revealed about Speaker. Certainly his corporate chops are not in question and his resume suggests he is something of a sporting visionary – someone well capable of conceiving a plan to transform a sport and then executing it effectively. According to an article on the ASP website his experience includes serving as Director of Marketing and Ideas at the National Football League, President of Time Inc. Studios, and President of RKO Studios where he was been responsible for the organizations’ creative development, advertising and organization-wide integration of marketing strategies.

Despite the lofty suggestiveness of his CV, Speaker has thus far been light on with the details about his intentions for the ASP, preferring to cache his plans for surfing in general statements like the one below.

“The transformation will be three-pronged: improving the fan experience, increasing professionalism in surfing, and developing a more effective broadcast initiative.”

While Speaker was reticent to discuss ASP specifics today, the conversation provided some insight into the ASP’s new ring-master.

Speaker certainly doesn’t come across as a mere opportunist who is flippant about his role. Instead you get the impression of someone who is sincerely looking at all the variables that might make the sport better. “ We’ve been using Surfline (US forecasting site) to analyse the contest swell windows to try and get the timing of particular events just right … I mean if we’d started the Gold Coast event a fraction later we would have had an even better result, given how good the waves were the day after.”

Commenting from the viewing deck of the contest site, Speaker also indicated that there had been discussions about a possible Australian grand-slam title, given that there would be three CT’s in Australia next year – The Gold Coast, Maragarets and Bells. (Margaret River has been upgraded to a WCT event for 2014).

While willing to consider empirical data on swell patterns, Speaker also appears to be someone with a breadth of imagination. “ What if we had a contest where the US navy lent us an aircraft carrier and a few Mig jets and we could surf anywhere within say an 800 mile radius,” he muses with a smile. Of course he’s not being serious in this instance but the comment implies that Speaker might be someone who isn’t afraid to do something on a grand scale.

He’s also well aware that he must divide his attention between the men’s and women’s tour if the overall model is going to work. “ The girls are ripping but we need to get them in some better waves,” he insists. When I suggest the Maldives as a potentially ideal location for a women’s tour event, Speaker is quick to consider the cultural dynamics of such a location. “What’s it like there in terms of the Muslim influence. Do you think they would be opposed to someone like Alana Blanchard walking around in her bikini?”

Our conversation lasts as long as a casual cup of coffee in the corporate area of the event. Before I can probe any deeper someone else has a pressing matter to discuss. Right now everyone wants a piece of Paul, but he seems to wear his mantle well, holding court amongst the small party of people who accompany him and earnestly considering the opinions of those who insist he lend them an ear.

In the short encounter I’m left with the impression that professional surfing’s new CEO is passionate about his role as caretaker of the sport – someone who thrives on seeing his vision come to fruition and making it work on an economic scale.  Kieren Perrow, who holds the title of interim commissioner, speaks highly of Paul and suggests that many of the details are yet to be revealed because the new ASP wants to makes sure things are locked in before they start talking about them too much. KP is aware that shifting the goalposts too often – as the ASP did with the half-year rotation system that was introduced and then abandoned – doesn’t do the sport any favours.

For now we still don’t know much about the future of the professional surfing, but Speaker has insinuated that by the time Bells rolls around he might have more of his cards on the table.

There’s no doubt there will be some surprises that don’t suit everybody, but at least it seems the person making the decisions is sincere in his endeavours to make a sport that so many of us love as good as it can be.