The word on the street when it comes to the world title.

As Mick Fanning, Kelly Slater and Gabriel Medina ready themselves for the next stage of the most exciting world title showdown in years, Tracks circulated the North Shore to get a gauge on what other pro surfers, fans and locals were thinking about the title race.

When he saw Gabriel having dinner at the pro surfers’ preferred North Shore restaurant, Lei Lei’s, Bushy couldn‘t help but give Gabriel a little stick. Aware that Gabriel has to face Dusty in his round three heat, Bushman walked straight up to Medina and said,

“Dusty’s Coming for You!”

When Medina finally tweaked what had been said his entire table went silent.

“I just want to see a good show like everybody else. Kelly loves a drama, he thrives off it … I think Kelly is pretty on top of his mental game and his nutrition. Mick has got the nutrition but he’s also got the training side. I think Kelly is more of a binge trainer. He surfs differently and those two have such different body types.”

It’s not like going for a world title is ever going to stop him (Kelly) from riding some kind of different equipment. It’s what keeps it fun for him and fresh. I think he wishes that the title race was closer.

“I think everybody’s just like, whoever wins it deserves it. Slater looks like a long-shot but he’s my favourite. That’s who I want to win.”

I feel like staying in the same house as Mick was a mistake for Gabriel. He’s going to have a lot of head noises while Mick is unrattleable.

“I’ve spent all my money to come here and see you win, Gabriel.”

“My new husband and I are here for Mick.”

It means a lot the Brazilian people and the Brazilian surfers. When we spoke to Gabriel he was like ‘I’m cool, I just want to go out there and surf. If it doesn’t happen now, it will happen at some point.’ I think he’s going to look for Pipe but his backhand is strong.

When asked if Gabriel would have the unequivocal support of the other Brazilian surfers on tour, he stated,

“I want to see Kelly win the title!”

Adam Melling: WCT surfer still in the draw. Defeated Kelly in round one.

“I’ll take down the guys getting all the media hype; definitely.”

Ryan Fletcher: Rip Curl pit-boss/team manager who looks after Mick and Medina on the beach.

“It’s good but it’s hectic. The Brazilian fans are really hectic. I had to fully palm one off.” 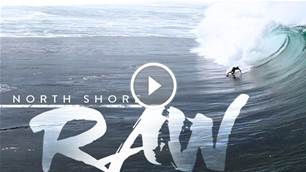