Are we just a bunch of racists that can’t handle change?

(Ed’s Note: We originally stated Benjamin Sanchis was a Brazilian freesurfer. Apologies to our readers)

Gabriel Medina has just won the first event of the year at Snapper Rocks. I’m standing at the Rainbow Bay Surf Club, sweaty, tipsy and scribbling ruthlessly. Parko has had the momentum all heat but Medina keeps fighting. As the scores lock in and the momentum shifts towards the Brazilian’s favour there is a sudden air of resentment seeping into range. This was not meant to happen. Not in Australia. Not at Snapper Rocks. Not against Parko.

Australians, Americans and Hawaiians have traditionally held a firm grip on the rank of world number one. Europeans and Brazilians have come and gone none really upsetting the applecart. But times are a changing. At 20-years-old Gabriel Medina is the man most likely to win this year’s world title. And that scares some people. It scares xenophobic surfers out there who can’t comprehend that suddenly the king of the castle won’t be from their home country.

If you pay attention to the comments section on surf media sites you’ll notice an unsettling trend. Each time a story, image or video of a Brazilian surfer is uploaded it’s basic hate bait for people to dish out racial taunts and put-downs. During Trestles The Inertia – with their catchcry ‘Distributor of Ideas’ posted a Medina drop in clip that went viral. They also inaccurately alleged that it was, “a blatant dick-move.” To their credit they followed up with an apology after Tracks broke the real story.

Of course there’s been times when our South American cousins have really got our goat; the drop ins, snaking, surfing in packs, claiming waves (but so does Jordy) and the general intensity they bring to a line-up. But is that where all the tension lies? Or is it that suddenly there are more Brazilian surfers making a dint in pro surfing, a world once dominated only by Aussies, Yanks and Hawaiians.

You can’t hate someone for displaying passion and fighting for a place on the tour so badly. There are seven Brazilians in the top 34 this year; Gabriel Medina, Adriano De Souza, Miguel Pupo, Filipe Toledo, Alejo Muniz, Jadson Andre, Raoni Monteiro and they didn’t get there by chance. Not one of these guys has a career outside contest surfing. They can’t drop movies like John John’s Done, scribble on t-shirts like Dane, get paid millions and have the world eating out of the palm of their hand. They won’t go into acting like Kalani Robb and I bet none plan to become the next Shane Dorian. They have to fight. They have to survive. And surviving means winning contests because there isn’t a cushy industry job waiting at the end of the rainbow when their pro surf careers dry up either.

Surfers from Australia, America and Hawaii on the other hand have the wriggle room to be complacent and maybe that’s why some of them have slid down the ratings and taken their foot off the gas. They’ve got what they want, houses, families, connections in the industry and English as their first language to fall back on. Think about all the former pro surfers from the west, who leaped into roles as team managers, reinvented themselves as freesurfers, started their own brand or found themselves in the commentary booth. How many Brazilian freesurfers do you think make decent a living? I count two, Bruno Santos and Yago Dora. Compared to the rest of the world their market is extremely niche.

The world is moving forward. We can keep grumbling and wind up like old farts, narrow-minded, bitter and twisted or accept that we live in a globalised society and that what we are witnessing is just a subtle changing of the guard. Judging from this year’s current QS rankings there will likely be a couple more Brazzos on tour come 2015. They’ll be being led by a Brazilian world champ if not this year, very soon. 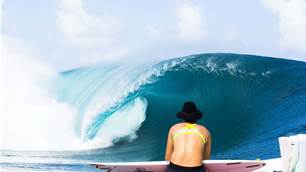