Instagram is an awesome distraction but with over 300 million users it is both an information highway and a digital garbage bin. Tracks have been sorting wheat from chaff lately searching for people a grown man wouldn’t feel weird about showering with heart-shaped emojis. Thankfully the surf community is loaded with them. First up is the thoroughly awesome Mason Ho, or @cocom4debarrelkilla as his 65.2K followers know him. Here’s why.

He digs the classics. The unmatchable lead work of Jimi Hendrix, the martial arts philosophy of Bruce Lee, the up-tempo reggae rhythms of Jimmy Cliff, the bold cosmetic curves of Pam Anderson and the timeless style of Michael Peterson all get richly deserved love. Even better Mason has access to an extensive surf movie collection and posts some classic clips from decades past. Anyone remember Waver Warriors IV? Mason does.

He’s is into yellow auros. “People with clear golden yellow auros do not worry, love to learn and learn with ease,” he quotes from a book called “The Power of Auras”. Which might explain how you airdrop into 10 foot Pipe (disclaimer: it may not).

He’s all about family. Mason shouts-out beneath an old photo of his dad getting barrelled: “Happy father’s day to all you baby-makers. Here I am in the sack.” Hand clap emoji times ten! Elsewhere he shares some fatherly advice relevant in the social media age. “Don’t court the flattery or approval of others”. Mason abides by that line. He does his own thing in the surf, on insty and in life. That’s why he’s so watchable. 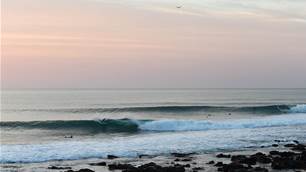 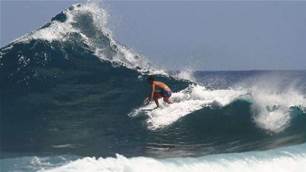