Who is going to win the Oi Rio Pro?

Craig Jarvis takes a look at a pretty funky bunch of surfers who might walk away with a big win in Rio.

Some say it actually packs a bit of a punch, while others say that it packs nothing but inopportune backwash, but either way the venue for the Oi Rio Pro, the beach of Saquarema, has seen some serious ripping going down. Seen as the wave isn’t a traditional perfect high-performance wave in the sense of a JBay or Trestles, it’s going to be the non-traditionalists rising to the top. Here are four such surfers who we think are going to be in it to win it. Can Yago continue his giant-killing run?

Yago is such a classic story every time he pops up. He cruises out to backline without a care in the world, focuses on one huge move when it counts, and pulls it off for big heat wins. His heat against Brother was so brazen in its approach, going super-huge on a backhand lip-launch air, and making it look so easy in the process with a clean landing, and his win against John John speaks for itself. Not too many people are beating John John these days, so even that’s enough to be a Kingmaker. Still, Yago is not resting on his laurels and will make short work of Gabriel in their round 5 match-up as he continues to the final. 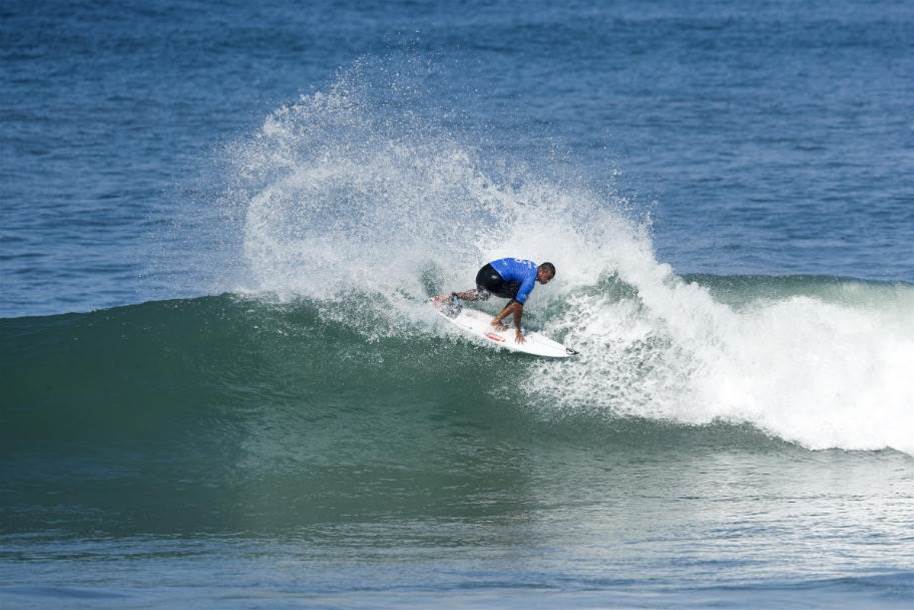 Wiggolly is in desperate need of a big result.

Wiggolly has his big win due any moment now, and his sheer persistence and hunger, along with his ferocious style and powerful backhand will get him onto that podium. He has been pushing as hard as he can for a long time now, with every turn on every wave tweaked as hard as he possibly can. The unpredictability of Saquarema plays into his hand and his versatility and beach break experience will see him out to a massive result in this event. Can Jordy back up after Bells?

Jordy might be looking nice and relaxed on the outside, but it’s just a veneer because underneath it all the man is just absolutely seething. He doesn't want to win this event, that’s not his game at the moment. He wants to win this event, as well as a few more including JBay and Trestles and Portugal, and go on to win that world title he has been eyeing hungrily since 2010. Saquarema is his kind of wave, with the inside rights looking something like the waves of Durban piers that he grew up surfing and honing his skills. Jordy just needs a few lip sections on a few waves and he will win heat after heat, all the way through to the finals and the only way he is going to be stopped is if the ocean conspires against him and doesn't give him the canvas to work on. If it’s him against anyone else left in the tournament on pure surfing, it’s game overt already. Can dark-horse Kanoa pip everyone at the line?

Kanoa is the dark horse that no one is watching closely. The only time he has made the news is when he correctly won an interference call against Filipe for trying to sneak a wave off him, but underneath that little bit of fame, he has actually been ripping so hard at Saquarama.  He has been sticking to the lefts mainly and his backhand surfing has been on point throughout. Long bottom turns, drawn out backhand arcs, and quick hooks and bashes on the inside section has seen him getting the good scores all week. Kanoa knows what to do to win CT heats, he has always known, but he just needs to keep within his rhythm and he’ll slip under the radar all the way to the podium. While Wilko has also been enjoying the turbulence that is the waves of Saquarema, Kanoa has him by a short nose in round 5.

I've said it before, I don't know everything, but this is my call. Lets see how the cards lie.