If Eddie Rothman is baking cakes for you at 18, your Hawaii game must be strong.

There I was rattling around an empty house at Backyards, Sunset. The house was massive, as only a Red Bull rented property in Hawaii can be. Yet with the surf pumping, the surfers, marketers, photographers, filmers, coaches and assorted hangers-on had all left the building.
I had stayed behind, supposedly, to do work. I was on a contract to communicate Red Bull’s new QS training program. Coach Andy King had identified potential CT level talent back in 2009 that included Michel Bourez, Tim Boal, Julian Wilson, Clint Kimmins, and Wiggolly Dantas
Anyway, they were out and I was in, when I heard a sharp, rasping knock on the door. I opened it to see, to my alarm, the unmistakably triangular outline of Eddie Rothman. His shoulders were so wide they wedged against the opposite door frames. His aggressive intent suddenly filled the empty house.
Not needing an introduction, he asked where Wiggolly Dantas was. Now I’d traveled with Wiggolly for the last six months. It was his first year on tour and his lack of English and generally introverted nature meant he was hard to read, even if he unfailingly unassuming and polite. I couldn’t imagine what Eddie Rothman wanted with the kid. I just knew that if Hawaii’s hardest nut was chasing down an 18-year-old Brazilian at his house it generally wasn’t going to end well.
I explained that Wiggolly was out, but that I would pass on any message upon his return in a voice that wavered with fear and adrenalin. Eddie responded that there was no need, but asked if I could pass on this to Wiggolly. He produced a Tupperware container out if his bag and handed it to me. “These are some flapjacks I made for him,” explained Eddie. “Just returning the favour.”
Later when I handed over the baked goods to Wiggolly he explained he’d been coming to Hawaii since he was 15. His efforts and attitude at Pipe had seen him befriended by the Rothmans and they had taken him in as one of their own. He has since done every full winter season in Hawaii.
“This kid will one day win at Pipeline,” coach Andy King told me later that day when I recounted the visit. “His surfing out there is at the highest level. And he’s 18.” Additionally, his technique was already formed and he had one of the easiest-on-the-eye styles of any Brazilian I’d ever seen.
Over this last weekend Kingy’s prediction, finally, came true. In the decade since Dantas went on to make the CT, finishing 15th in his rookie year in 2015, but falling off in 2017 after three years. Over those years on the CT he made plenty of Quarterfinals, usually at waves where it was either big and barrelling, or at righthand points where his lethal backhand could come into play. At the Volcom Pipe Pro, he used both to devastating effect. However prior to his week at the age of 30, and having lost his long-time sponsor Quiksilver a few years ago, it felt that any chance of a return to the CT was long gone.
So it was fitting that at the wave he has surfed more than other, Dantas reignited his push to be back at surfing’s top table. Few surfers have worked harder at making themselves comfortable at Pipe. Almost none have done it the humility and grace as Wiggolly. The rewards were $20,000 and 5000 valuable QS points. And I’d bet Eddie Rothman baked a special batch of homemade flapjacks. 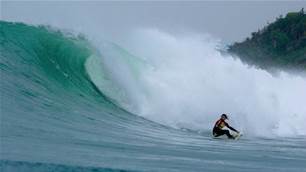 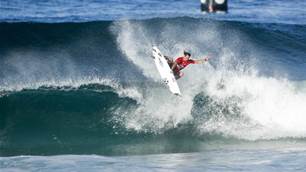 Wiggolly or Yago or Jordy or Kanoa? 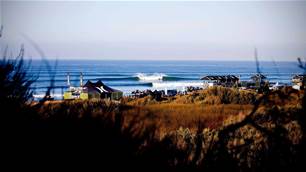