Meanwhile, Connor O'Leary is no longer under the radar

When Matt Wilkinson made his unheralded dash to the front of the Jeep Leaderboard in 2016 he turned the tour on its head, but even after consecutive victories in the first two events his grip on the yellow jersey seemed somehow tenuous. As much as the fans loved seeing Wilko in front, everyone was half waiting for him to fall over and tragically he did, eventually succumbing to the wizardry of John John Florence

In 2017 he’s built a very different yellow brick road to the top of the Jeep leaderboard, and while clinging to the tour’s cycling-inspired singlet will be extremely difficult, there’s a real sense that Wilko now deserves to be a world title contender.

While other seeded surfers lost their way on the shifting walls of Cloudbreak, Wilko established a position as one of the event’s form surfers from the outset. He didn’t drop a heat the entire event, dominating both of his non-elimination rounds.

However, winning contests invariably means performing on finals day and when required to step up, Wilko was not found wanting. Against an in form Julian Wilson in the quarters Wilko struck early, locking in an 8.33 and an 8.67 in the opening seven minutes, spearing through long barrel sections and giving the rail plenty of love. Wilson rallied but Wilko had done enough to hold off the late charge.

In the semis Wilko was matched against golden toes, Michel Bourez. As Bourez burrowed and belted his way to the lead, Matt was left chasing a score.

With 17 seconds remaining he paddled into a wonky lump, needing a 5.67. The swooping carve to barrel set-up ensured he was able to extricate the maximum score out of a mediocre wave and the resulting 5.9 put him through to the finals. Paddling out against Connor O’Leary, Matt could take confidence in the fact that he’d won from behind and from in front. Whichever way the final unfolded he’d been in the scenario before.

Lurking in the channel as O’Leary and Wilkinson paddled out were Luke Egan and Glen Micro Hall, the two ex-pros who have emerged as surfing’s super-coaches and created a sideline rivalry that adds an intriguing dimension to the WSL stage show. Big Luke, the stern-sounding iceman who could dismantle you with a stare and likes tuning up cars when he’s not fine-tuning surfing acts Vs Micro, the little master who always sounds like an excitable jockey who just won the Melbourne Cup, when the WSL makes its regular throws to him for comments.

When the onshore ruffled the surface as the starting siren sounded, it seemed like the impact of barrels would be negated. It didn’t really matter though, as Luke Egan pointed out, “These were the two guys who had been hitting the lip harder than anyone else all contest.”

To many, O’Leary’s presence in the final was almost as astounding as Wilko’s 2016 bolt to the front, but it’s certain that from now on Connor will no longer be able to trade on the ‘Under the Radar' tag . Much has been made of his Japanese/Australian background and it seems his surfing has inherited the best of both cultures. Like many Japanese surfers he boasts the precision of a samurai-wielding warrior, but backs it up with all the raw power of an Australian, Rugby League centre. His wave selection is spot-on and he has a low mistake rate, making him very difficult to beat every time he paddles out. 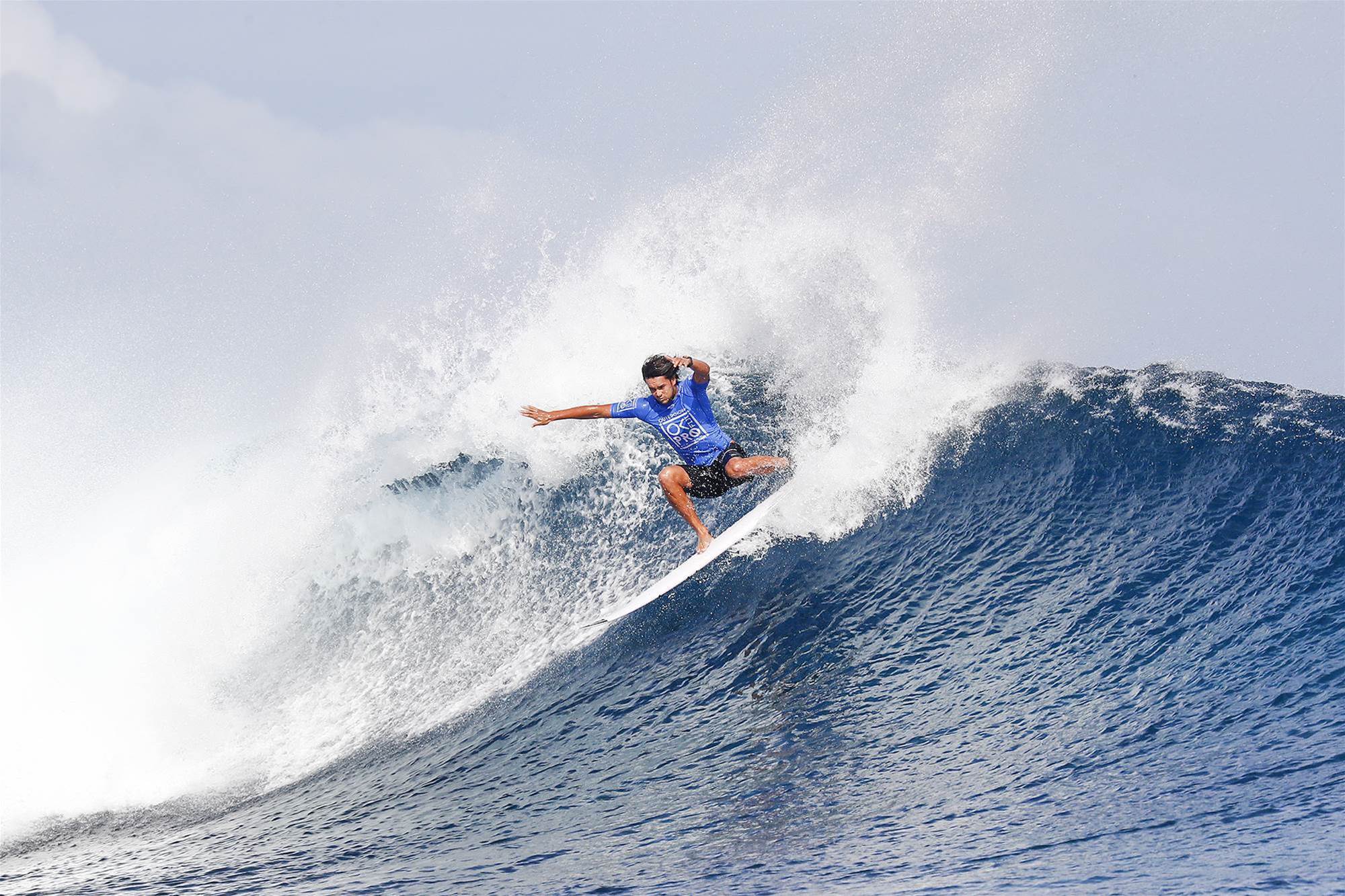 Connor O'Leary laying down a rail and earning a new reputation as a major player on the WSL: Photo WSL/Sloane

Unphased by the occasion, Connor took control of the early stages of the final. Like a slugger in the ring, his frontside gouge has a slow, drawn out wind-up, but when he eventually makes contact with the lip, the velocity and power increases dramatically. His opening 8.33 was an exercise in lip demolition, but if he is to have any regrets from a sterling finals performance it might be falling on the last manoeuvre of this wave. Perhaps it may have made a difference, perhaps not.

So often finals are an anti-climax, but this was 40 minutes of Fijian, pro surfing fantasy. The lead changed multiple times, the wind swung back to offshore, O’Leary had to recover from an injury after finding a barrel and Luke Egan almost looked ready to go and sit on Wilko himself. Pro surfing finals don’t get much better, particularly when you throw in a late victory.

Again Wilko was left hunting a score as the clock went into its death throes. Chasing a 7.13 he wailed on rail and posted an 8.03. to eclipse his second place finish in the same event last year.

Post-heat the media were all over Wilko like hyenas on fresh prey, immediately asking him about his reclaiming of the yellow jersey. “It’s back!” her roared from beneath his lion’s mane, “Now, I’ve got it to keep.”

After a torturous waiting period, for the WSL it had been the most charmed of days – pumping waves, scintillating performances and a commentary package that was undeniably enhanced by the presence of Kelly.

Slater swapped Fiji anecdotes with Barton Lynch and delivered his typically revealing insights on the competition unfolding. He even had to artfully dodge questions by Ronnie Blakey about returning next year for another full-blown attempt to claim the title. Of course he wanted to be out there trading blows in a singlet, but at least he could take solace in the fact that the first event he’d sponsored with Outerknown had finished on the highest of notes.