If you can’t beat them, then take them out of the race.

While philanthropy has proven to be a meaningful distraction for Kelly, podiatry is still his major concern when it comes to the Pipe masters.

With the keys to surfing heaven, (aka The Surf Ranch) in his back pocket,
Kelly has been prolific in his promotion of his initiative to use the
the wave pool as a means of raising funds for hurricane victims.
However, while Kelly’s altruism is commendable, the good karma has done little to accelerate the healing of his right hoof.

Sources close to Kelly suggest that the right foot he broke back in July at J-Bay is still not properly healed. Despite the injury, Kelly has been playing golf and bouncing between Florida and Costa Rica and is expected to compete in the Pipe Masters. As it stands he’s listed to paddle out in round one, heat eight against Kolohe Andino and Joan Duru.

He is likely to arrive in Hawaii early next week, in typical, abra-cadabra, here-I-am style, just before the Pipe Masters waiting period begins. While far from ideal, the lingering foot injury is unlikely to stop Kelly from kicking down backdoor barrels. 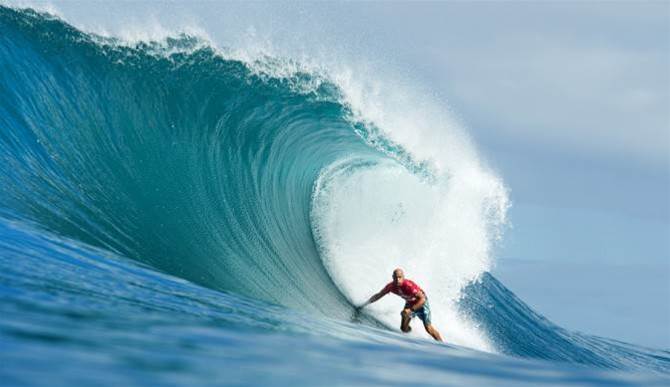 Toe troubles haven’t prevented Kelly from claiming victories in the past. He won at the Rip Curl Pro Bells in 2010 with a bung foot, and many moons ago he hobbled to a heroic victory at Teahupoo.

One might be moved to ask, what’s in it for Kelly at 45? Is he in danger of following the path of the other ‘Greatest’, Muhammad Ali, and going one too many rounds?

Masquerading as a psychologist allows one to propose a couple of theories about Kelly’s decision to compete. Pipeline presents Kelly with possibly his best opportunity to produce another grand-fabulous result. In hollow waves, he is still one of the best, as he proved only a year and a half ago by claiming the Billabong Pro Tahiti. Kelly has won Pipe a total of seven times and last claimed victory in 2013 when he denied John John Florence the home-court victory he so desperately craves.

One must also suspect that Kelly loves to waltz on to the Pipe stage, with a world title in the wind, and play the spoiler. Nothing is more validating for Kelly than beating the likes of John John, Medina, Jordy and Julian, who are of course the key performers in the upcoming Pipeline melodrama. Kelly also resonates a kind of gatekeeper vibe; an unyielding sense that if you really want the World Title or the Pipe Masters then you should have to get past him to claim it.

Most fans would probably love to see Kelly blaze. Even after nearly three decades on tour every synapse and cell in his body can bend itself towards winning. His charitable initiatives are endearing, but it’s his ruthless self interest that make him so riveting to watch in a competition scenario.

Hopefully the conditions conspire to make his crumpled foot less of a disadvantage. There’s no denying that a Pipeline Pantomime is much more fun to watch when there is a ruthless character who is hell-bent on upsetting everyone’s well-laid plans.

In case you had forgotten the scenarios, which you can expect Kelly to have his mangled footprints all over, they are below.