A new home, a baby on the way, pink boardies and the title quest.

Most surf photographers have guys they love to work with – the ones who make the long hours behind the lens an exciting endeavour rather than a grind. For veteran, Newcastle-based lensman, Peter Boskovic, Julian Wilson is definitely on his all-time-favourites list.

“If I could choose between Medina, John John and Julian to shoot with I’d choose Julian,” states Bosko emphatically. “You, just never know what he’s going to do next.” Julian Wilson finds a ramp at one of his new Newcastle haunts. Photo: Bosko

The good news for Bosko is that Julian, originally from Coolum on the Sunshine Coast, recently made Newcastle his permanent base. Julian’s wife Ashley is from Newcastle and with the couple expecting their first child they wanted to be close to Ash’s family. 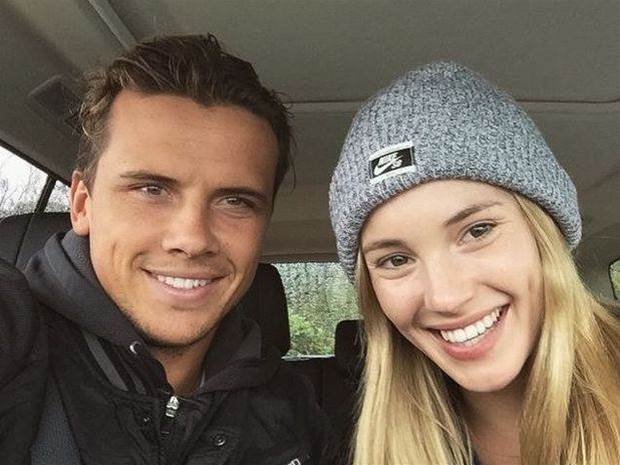 Julian and wife, Ash, are expecting their first child.

In the interim Newcastle’s regular supply of rippable beachies and wedges are providing an ideal training ground for Julian; particularly when he has sparring partners like Ryan Callinan and Craig Anderson to keep him in tune. Both of the gifted, Newcastle goofy footers have shared a few sessions with Julian in recent weeks. Isn’t that a little free-surfing jam you’d like to see go down at your local beachie? Julian providing the entertainment for the Novocastrian onlookers. Photo: Bosko.

Julian’s relocation has also caused a buzz for local surfers. When Jules paddles out there is usually a gaggle of grommets watching on intently from the beach or the shoulder. “The kids love having him here,” suggests Bosko.

It’s likely to be a big year for Julian. On a personal level the arrival of his first child makes it very apparent that the kid in the shell necklace is definitely all grown up. In the competitive sphere Jules (now 29) knows it's time to become a fully-fledged contender for the world title. Since joining the tour in 2011 he has only finished outside the top ten once and his third place finish last year was a career best result. However, although he was an outside contender for last year’s world title, Julian is arguably yet to live up to his own expectations, or those of his fans. It seems only a world title will satisfy both parties. Remember the kid in the shell necklace?

As the competitive careers of Mick Fanning and Joel Parkinson appear to be tapering, Australian fans in particular will be looking to Julian to challenge for the title. Honing the ability to convert his superior free-surfing ability to heat scenarios will be crucial in Julian’s quest for the crown. Jules climbing the foam down near his new home. Photo: Bosko

There’s no questioning Julian’s commitment to claiming a title. He has commissioned Andy King (Former head coach at Surfing Australia) as his full-time corner-man and with a solid swell on the horizon, Julian is currently heading North to the Gold Coast to prepare for the upcoming Quiksilver Pro. Conscious of having a meaningful purpose beyond competition, Julian is also launching a new board-short in conjunction with Hurley to raise awareness for breast cancer. Julian has been a long-time advocate for the cause since his mother, Nola, overcame breast cancer. Jules has collaborated on clothing with Nola before and was happy to ask his Mum to come up with the design for his signature pink trunks with the big title – the Hurley Phantom Julian Wilson Snapper boardshorts. Julian punting in the pink trunks he is launching to raise awareness about breast cancer. Photo: Miller

Hopefully the equation of a move to Newcastle, a new baby and well-intentioned pink boardies  help inspire Julian’s quest for pro surfing’s ultimate prize. With the rivalry between John John and Medina pushing them to greater heights and Jordy Smith looking increasingly more likely to make his own claim on the title, Julian will have to be at his best if wants to be in the mix.