Teahupoo approved as the Paris 2024 Olympic Surfing venue for both men’s & Women’s events.

This week the IOC confirmed that surfers competing in the Paris 2024 Summer Olympics would be trading pits at Teahupoo rather than slugging it out at a French beachie.

“Tahiti as the Olympic venue is testimony to Paris 2024’s spirit of creativity and innovation,” said International Surfing Association President and Olympic surfing figurehead Fernando Aguerre in a press release. “Surfing is a sport for the new era of the Games and this approach by Paris 2024 demonstrates how our values are aligned.”

But what will Teahupoo mean for the ladies?

In the early 2000s, the Billabong Pro Tahiti included both men and women events. Then in 2006, the then ASP (now WSL) scratched the event without warning. When surfers were notified seven-time world champion, Layne Beachley was fuming when The Sun Herald reported on the axing of the women’s event.

"There's been a rumour going around that the girls all got together and decided they didn't want to go there because we were too scared," she said.

"That's completely untrue. It's annoying that people would think that. I report to the ASP board about what the girls wanted and we definitely wanted to keep going back.

Beachley’s stance was despite her feelings about Teahupoo realising that if equality of the two sexes in the sport was to ever happen the girls would have to confront Chopes and overcome their fears.

"I don't like Teahupoo but I know how beneficial it is for women's surfing," she said. "It's of huge importance. It shows how far women's surfing has come. Why would you walk away from such a huge marketing opportunity?”

"There was no communication, no nothing. No one asked us about it, they just told us, 'From next year, you're not going to Teahupoo'."

15 years on and a few of the women on Tour have taken up the challenge head-on. Carissa Moore spent time in the Tahitian lineup earlier this year perhaps realising it as a possible Olympic venue. She offered a candid perspective on where the girls sit in one of surfing’s premier proving grounds.

I’m not going to lie, I was more nervous than excited when I saw the swell for Teahupo’o on the charts.

The anticipation built with each passing day in preparation. How big was it going to get? What were the conditions going to be like?

The swell arrived on the second day of our trip. I was shaking with fear as I watched the first big set of the day roll in from the boat. “Why am I doing this?” I asked myself.

In that moment, Raimana pulled up next to us on his ski. Wrapped around his waist were tiny arms and a little girl peering around his shoulder. That was it.

In a lineup of boys, at one of the most challenging waves in the world, despite my fears, I wanted to show that little girl what is possible.

Aside from Carissa, both Tatiana Weston-Webb and Caroline Marks have spent time at the end of the road. They might not be paddling into Nathan Fletcher sized caverns we’ve become accustomed to seeing yet but they are showing up and putting in the time. While Keala Kennelly has made a career out of sending it at Chopes.

My First time surfing Teahupoo.. Ps working on a new fashion statement with my leggings. Got too much sun 🤪 thanks @redbull , @mikeparsons1 and @raimanaworld for help making this happen. Funnest trip ever!! Filmed by @noahjm22

As Layne echoed in 2006, an event at Teahupoo receives worldwide interest. From the carnage to the late drops and spitting pits there is no other wave like it on earth. Who wouldn’t want to see the world’s best female surfers race the bar and redefine what’s possible with a CT stop there?

"It's the most extreme event on tour and gets worldwide interest,” said Beachley. “It shows the women have the depth, the ability and the courage to confront the challenge. Not one girl on tour doesn't have the guts to take off now.

Time is on the girls’ side. We could see more ladies spending time in the water at Chopes, maybe even coached by their more experienced male counterparts. And if the WSL is all in with women’s surfing who knows the girls could see a return to Chopes in a jersey next season. 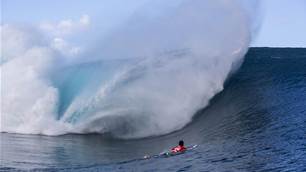 Teahupo’o The Proposed Olympic Venue for 2024 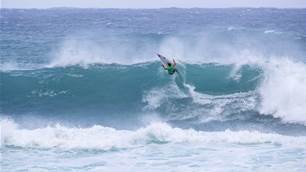