Stay away from those rocks.

It’s amazing how many people don’t understand the power of the ocean. Surfing’s a gift in that way. As a grom, you mistime a rock-jump, you scratch around the inside on a big day and wear a set on the head—you learn pretty bloody quickly this is a place you need to have your wits about you. But being a surfer, walking around in your own little wave-/wind-/tide-obsessed bubble, you forget about the rest of the world. Then you see a video like this one shot at the Wedge over the weekend and it becomes all too clear: a lot of people have no fucking idea.

Now the Wedge looks like a gnarly enough joint for even the most skilled wave-riders, but for a hapless couple on a rented jet ski at six-to-eight feet, it was always going to be out of their league. Details as to how they ended up there are a little sketchy, but Newport Beach Marine Safety Captain Skeeter Leeper offered the following explanation to local Orange County rag The OC Register: ‘Apparently, they were just kind of lost or something. He just drove straight in. They rented a jet ski and they were at the wrong place at the wrong time.’

Living in Australia, I’m unfamiliar with the laws and regulations around jet ski hire in California, but it’s pretty scary to think that with such a large swell running, two people with little-to-no idea can motor gaily out into the untamed elements and put themselves (and everyone else) in such a life-threatening position.

Still, the video’s not without its comic qualities. The music is sensationally melodramatic and the sight of a jet ski sitting on a break wall as if it belongs there is always good for a laugh. But really, what the now-viral clip highlights best is the perils and dangers of the sea for those who don’t have the knowledge or experience to be out there. Luckily for them, the efforts of the highly-skilled beach lifeguards as well as the nearby bodysurfers ensured that the situation didn’t end half as badly as it could have and they were brought to shore unharmed.

‘It was the craziest thing I’ve ever seen,’ said Newport lifeguard Rob Marienthal. ‘Everyone who saw it couldn’t believe their eyes.’ 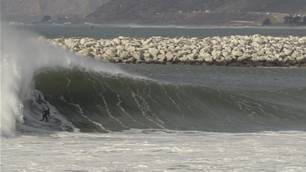