“Hopefully we’ll just strap it up, paddle out and go from there.”

It was on Mick’s second surf of his second day in J’Bay. An innocuous cutback pushed a little to far saw Mick guillotined by the lip as he arced back to the power source - the power of the lip enough to tweak his ankle. Conjecture is rife about the injury and what it means for his campaign to build enough points to re-join the tour in 2017. Hear from the man himself as he rests up in the leadup to the contest. 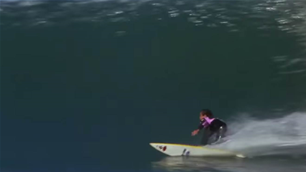