See what it takes to compete at giant Peahi. Hint ... it's a lot!

Nate Florence’s vlogs are always worth a watch, but in this edit the middle Florence sibling takes us behind the scenes as he competes in the Jaws Big Wave Championship, and it’s probably the realest look at what goes in to competing in perhaps surfing’s heaviest event.

From the early morning start on the day of the contest, trying to harness the anxiety and adrenaline coursing through the body. Watching anticipation as Jaws maxes in front of your eyes, knowing you’re about to take it on. Doing press. Swimming out through a Waimea style shore break on boulders to reach the ski, surfing three long heats in which beatings and giant tubes abound. Then trying to bring yourself down, on the other side of it all.

It’s a wonder these guys don’t sleep for a week afterwards having tapped every ounce of energy their bodies can give.

Of course all of this is delivered in Nate’s casual nature, but to a mere mortal , it’s insane what these guys do. 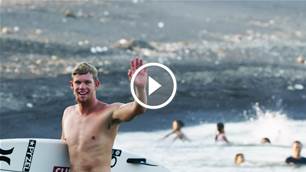 A Bali Holiday with John John and the Crew