Derek Hynd goes digital with his gritty pro-surfing doco' and dedicates it to Sunny Garcia.

While Derek Hynd is now best know as the guy at the unhinged frontier of finless surfing, throughout the 90s he was one of pro surfing’s most astute and prolific observers. While the pen was Hynd’s preferred weapon for his witty and direct evaluations of pro surfers, in Pro Land he makes use of the video medium to deliver a gritty take on the 1998 world title race, which featured Slater, Danny Wills and Mick Campbell as chief protagonists. Occy played a big part, as did Sunny, and DH has dedicated the re-release to Sunny. DH wrote at the end of his Facebook post, “Finally, to Sunny Garcia who's battling at the moment. Sunny, Brother, this is for you. This is why I'm sharing ProLand after a generation lost in a box and uncovered by Jeremy. One million people are at your side. That aint no lie. Love and Mahalo"

Note: Lookout for the footage of the slippery dip inside Hynd's famed J-Bay House.

"Fair to say this cheap offering led to alot of change 20 years ago. Shot on a Sony one chip. Hand held. I suddenly realized at the end of the Australian Leg that a unique Race was developing and bugger the quality...just start documenting. Thanks so much to Jeremy Nowland for the nocturnal months spent with him at his cannibalised Pentium editing suite(a genius) and also to the original soundtracking skills of my best buddy Pico. His voice and adaptability to a range of sounds struck a major chord with surfers all over the planet.

To this day I get asked if he's coming to tour. Safe to say that The Search campaign benefited considerably from his touch as well. Thanks to Jesse Faen who leant me his own Sony one chip when mine was ripped off by gypsies in Lacanau. Luckily I found the tossed tapes. To Danny and Mick, in-sane effort, and to Rob Rowland Smith their trainer, "Fit Fucken FIT". To Kelly, so on song and personable to all and sundry. What a credit to the profession. To OCK, seeing you back in form was just like The Stones' "Can't You Hear Me Knocking". To Shane Beschen the gut comments and observations and drives through the last third of your turns that season - influential and for the historical record, they matter today. To the entire lads and lasses and sponsors and surf fans, we all tapped something through this season. Finally, to Sunny Garcia who's battling at the moment. Sunny, Brother, this is for you. This is why I'm sharing ProLand after a generation lost in a box and uncovered by Jeremy.

One million people are at your side. That aint no lie. Love and Mahalo." 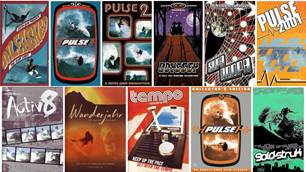