A new vision for a classic campaign.

The Rip Curl concept that took surfing to new frontiers and dropped us in the world’s dreamiest lineups is back. Check out the clip above and read about how you can get caught up in the mystery of The Search …

The Search is the driving force that lead to the creation of Rip Curl. It's the one true thing that Rip Curl has that no one else does and it lives in the spirit of everything the Rip Curl crew do. It's what makes Rip Curl unique. It defines who we are.

In recent times The Search has bubbled away in the background of our brand. You can find it here and there in trips like Secret Search in the Marshall Islands with Martin Daly on the original Search boat Indies Trader 1, in the six month voyage of the Quest 1 in Tip 2 Tip covering Indonesia from end-to-end, or surfing the tidal bore of Big Bono in Indonesia and Mick Fanning's movie Missing. But we are back better than ever and there are some exciting times ahead.

Launching in line with the Rip Curl Pro in Portugal on October 20, 2015 and using that platform to broadcast to a large global audience, viewers will initially see some great content, which describes The Search and what makes it so great.

Throughout November 2015, a weekly drop of new "Search Stories" will let surfers in on The Search even more and give way to the type of surf exploration they can expect in the months ahead. Then on December 1, 2015 a full launch of our global website will drop with the first two chapters of our recent Search missions coming out in full around the world.

From there we will deliver a new chapter every month, showing the likes of Mick Fanning, Gabriel Medina, Alana Blanchard, Tyler and Owen Wright, Nikki Van Dijk and Matty Wilko all on the road to adventure. Our top WSL surfers have been out there Searching between heats for the past six months and it really feels like they have been ready to go anytime, anywhere.

Meanwhile, guys like Dillon Perillo, Luke Hynd and Tom and Pat Curren - free from the constraints of competition - have discovered some great new waves in some sneaky corners of the planet and are enjoying the journey every single day…

So if you're sick of school and work and want to be inspired to pack up and live the dream, visit ripcurl.com/thesearch to join us on The Search in the months ahead. 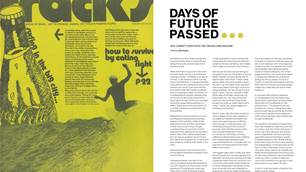