One thing that sports like skateboarding, or even basketball, have had over surfing is an even playing field for competitors. For skaters, theirs is literally set in stone. Everyone has the exact same opportunity to perform. Surfing, however, is performed on liquid and waves in the ocean are like snowflakes, no two are ever the same.

Take the game of s.k.a.t.e. as an example. A super fun and lighthearted form of competition borrowed from basketball, in which one skater performs a trick, and the other tries to replicate it. Fail to do so and you earn a letter ’S’. Fail again and you earn a ‘K’, and so on until the loser spells the work skate.

Surfers have long envied the ability to play it legitimately. A game in the ocean is horribly flawed due to the random nature of the ocean. But now with the ability of wave pools to pump out near-identical sections over-and-over, the game is now in reach.

Here Kevin Schulz and Evan Geiselman play an epic game of S.U.R.F on the frigid mid-winter ramps of the Waco pool. 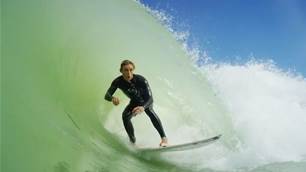 Watch: The ABC Reports from the Updated Surf Lakes Pool in Yepoon 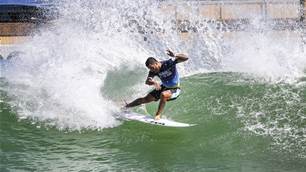