Minus the reef, and plus a lot of rubber.

Yesterday we watched a thrilling conclusion to the Pipe Masters in which John John Florence finally received the silverware was destined to win. We also watched as the Women took to the Pipe lineup in official competition for the first time. It was glorious watching, as it always is at Pipeline.

During this time of year Pipe eclipses all other waves in terms of coverage and saturation. It’s everywhere, seeping into every pore of surfers around the globe. The mind becomes twisted. Everywhere we look we see Pipeline. At breaks around the world, surfers begin to describe their own lineups as being ‘a bit like Pipe’ if they even remotely threaten to tube. It’s a cringeworthy call, but one we’re probably all guilty of making at some point.

The folks who scored this recent session in central California may get a pass, however, as we’re sure you’ll agree after witnessing the gaping left-hand tubes on offer in this clip, although the Mexican Pipeline of Puerto Escondido might be a more apt comparison.

Now, I’m off to go for a wave. There’s a low-tide rip bowl at my local that I swear looks a bit like Pipe. 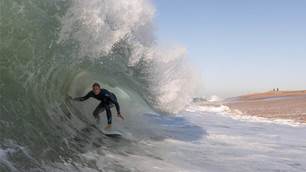