We’re not sure, but we do know that the waves in Portugal are wild!

We’ve watched quite a few of Nic Von Rupp’s vlogs now, and we’re quickly coming to the conclusion that Portugal might be one of the most underrated wave zones on the Planet.

We knew it was good, but every video that drops seems to show Nic at some perfect, super heavy, reef/slab setup, at which he proceeds to get tubed out of his mind.

This clip is no exception. Here Nic, along with friends Miguel Blanco and Antoni Silva take on one of Europe’s most feared waves, The Cave. To give you an idea of how unforgiving the reef is at the wave, Nic dons not one but two 4/3 wetsuits to give himself some extra padding in case he hits the bottom. Oh, and Antonio has also previously broken his back surfing it. 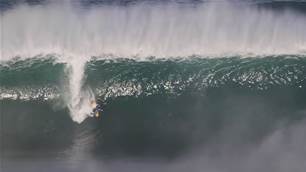