You’re not going to get a more creative test pilot.

If you’re into surf hardware current affairs, then you’re probably aware that FCS just released their H4 fins to the market.

The basic premise is that they’re Swiss engineered and designed to deliver ultimate speed to your board without sacrificing manoeuvrability or control.

They’re also pretty unconventional looking, with a wild side fin template that sports a hatchet like tip, reportedly for increased stability and control.

He even gives his breakdown on the fins performance at the end of the clip. 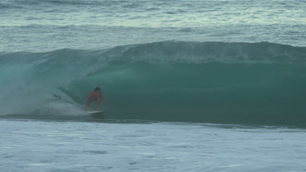