It may not be over reef, but it’ll wreck you just the same.

This clip, loosed onto Youtube by the brothers Colapinto, features a gnarly session that recently went down on the Pipe sandbank. Despite the presence of a few heavy hitters in the lineup, it’s was Australia’s own Morgan Cibilic who stars, scoring the wave of the session, which featured more doughnuts than makes, and some heavy-duty leg-splitting ones at that.

It’s great to see the Postcards from Morgs star still toughing it out on the North Shore, putting in his time despite the cancellation of the tour being announced weeks back.

And why wouldn’t he? It’s summertime back at home, which means the east coast towns are filled to bursting point with tourists, and at this time of year a steady diet of northerly wind-slop isn’t exactly the stuff of dreams.

Much better to dig in on the North Shore, surf some big stuff, get to know the waves a little better in hopes that the time will come when he’ll surf a tour event again on the famed stretch. 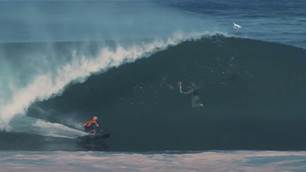