As the tour readies to kick off in Newcastle, let’s celebrate one of the city’s brightest stars.

Above surfing, above contests, above backside fin-blast cartwheels, above all else, Ryan Callinan is a good human. Anyone who has spent any time with Ryan can attest to that. He was raised right by his dearly departed Father, Gary, and Mother, Janice.

However, he is also a surfer of astounding ability. Glimpses of which have been seen during his time on tour, and in clips and edits that have been dropped over the years. Now with the release of his new flick ‘Just For Now’ we get a full fifteen minutes of Ryan’s surfing that’ll leave no doubt in your mind of just how high a calibre of surfer Ryan is.

The timing is fitting too. The WSL is just about to reboot itself in Ryan’s hometown of Newcastle, and you can bet the entire city will be behind their boy, egging him on to a hometown victory for the ages.

If he can produce surfing on the same level as what’s contained in this flick, he’s in with a shot. 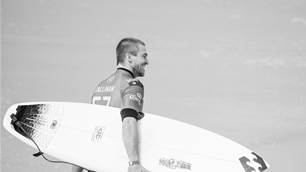 Caffeine Fiends and Novocastrians conquer on day one at Newcastle.