According to many first-hand accounts the Burleigh Single Fin Festival was one of the funnest events they’ve witnessed … or been a part of.

The comp itself has been around for quite a few years now, and originally served as an excuse for members of the Burleigh Boardriders to get out the point and score some waves solo. But recently it has slowly gainined momentum and transformed into something pretty special.

When you’ve got the likes of Shane Dorian, Joel Parkinson, Creed McTaggart, Occy and Tom Carroll among others in the draw it seems to emphasise that point.

Below you can check out the vision from the comp, before jumping on Gumtree and searching for your own vintage single fin … if you can find one that won’t send you broke! 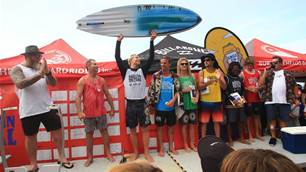