The victor releases a behind-the-scenes vlog from the tense surf-off.

The Mikey Wright, Leo Fioravanti surf off was originally conceived back in 2019 after the WSL couldn’t decide who to give the injury wildcard to. It was supposed to run at the first event of the year, the Corona Open at Snapper Rocks, in March of 2020. And, as we all know, that event along with the rest of the 2020 tour was scrapped, because Covid.

Then, when it was announced that the Pipe masters would be running in December to kick off the 2021 season and that the surf-off would be running along with it. As far as the ideal venue for a career-defining showdown, it doesn’t get much better than Pipeline.

If we can’t have the Pipe Masters deciding world titles, ending and saving careers, in its usual fashion at the end of the season. The surf off would at least add a gripping storyline to what is essentially now a ramification free event for the surfers on tour.

The surf off has now been run and won, and Leo Fioravanti will now be joining the tour as a card-carrying member for the rest of the year. Poor Mikey Wright cruelly cast back into the limbo of the QS.

Here we get a behind the scenes look at the showdown from inside the Italian’s camp as he vanquishes Mikey in what was a tight contest. 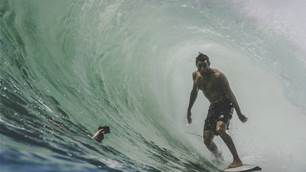