From barrel racing in Florida to one of the best surfers on the planet.

After Caroline Marks’ round of 16 win over Amuro Tsuzuki during yesterday’s competition at the Rip Curl Narrabeen Classic, there was mention made that her new bio-flick titled ‘That’s Caroline’.

Mark’s claimed it was a blast to make, and it also differed to anything she has put out previously as it delved deeper into her childhood and what makes her who she is today.

From a youth of barrel racing and backyard fun in Florida through competitive moments with her brothers that spurred Marks to become one of the best surfers on the planet.

“It was so fun to relive some of my most intense waves and proud winning moments in the film, “ said Marks, who will be surfing alongside the world’s top athletes this summer. “Never did I think I’d have a film crew following me around, sharing my life’s story. I hope after seeing the film my fans wills be cheering me on even more as I compete for gold. It’s all a dream come true.” 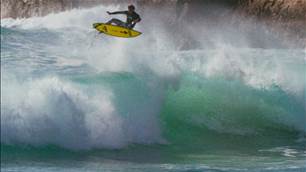