It’s been five years since I nearly died at Sunset, courtesy of being stabbed in the throat by my board. Although the footage of the incident has been available for some time I didn’t feel comfortable sharing it until now. Just a warning, it’s pretty squeamish if you can’t handle the gory details. The full details of what transpired are below in an abridged version of the story that appeared in the Sun Herald newspaper.

The incident was filmed by Adam Klevin, who I encouraged to keep shooting while I was being treated on the beach by surgeon, Chris Maguire. Adam’s encouragement and words of support were much appreciated.

From The Sun Herald

The morning after flying in to Hawaii I paddled out in perfect 8-10 foot conditions at Sunset, alongside colleague, Colin Bernasconi. We’d only had four hours sleep but buried any thoughts of fatigue once we saw the waves.  The water-surface was billiard-table smooth and the swells resembled giant folds of liquid velvet. The action was centred on the break’s hollow inside section, where former world champions, Mark Occhiluppo and Tom Curren were trading waves with big-wave guru, Ross Clarke-Jones.

Consumed by the show being put on by some of the world’s best and conscious of ensuring I had at least one wave of my own to talk about over breakfast, I stayed out for over three hours. By the time I began the long haul towards the beach my shoulders felt like setting cement.

The paddling load was lightened by an affable Hawaiian bodyboarder, who after picking up on my accent, inquired as to whether Australians had to deal with alligators in the surf. I was still laughing when he kicked in to a wave and left me to paddle the remainder of the distance, in what I expected to be flat water.

Metres before I made it to the beach a large wave, thicker than it was high, reared up behind me. When I turned to push through the powerful wall of water, my board was ripped from my arms. While underwater an indiscernible part of the board struck me in the neck, with what felt like the force of a Mike Tyson punch.

By the time I popped up in waist deep water, I couldn’t breathe or talk. I signalled frantically to the bodyboarder, who by now was clambering up the beach in his flippers. Sighting the blood pouring from my neck he bolted down to the shorebreak and dragged me up the beach, where I collapsed on my knees. Unable to breathe, I fully anticipated the moment where I would black out and hopefully make a painless exit from the world. Fortunately it didn’t play out that way.

Somehow the oxygen was reaching my lungs but the by-product of my laboured breathing was a gasping noise that made me sound like a stuck donkey. One of the first guys on the scene was clutching a video camera and screaming, “You’re an iron man, you’re going to live.”  As more people became aware of my injury pandemonium ensued.

I recall looking around and seeing ashen faces, their apparent desire to help hamstrung by a lack of relevant medical knowledge. Things took on a kind of dreamy haze and I felt a flap of skin on my neck flutter like a miniature flag in a light breeze. The sensation of air escaping through my throat made me acutely aware that I was taking oxygen in via the same crude vent.

The lifeguards were on the scene early but with all the blood they had difficulty determining the nature of my injury. When someone put a cloth across my neck it was much harder to breathe and I feared I was going to be suffocated by a well-intentioned bystander. Still speechless, I waved my hands with whatever strength I could muster. Thankfully Ross Clarke-Jones read the charade and shouted loudly to take the cloth away. Unbeknownst to me, a few bystanders had readied themselves to perform an emergency tracheostomy, which would have involved ramming a piece of hose or a pen into my windpipe. My fate took a serendipitous turn when a confident figure stepped forward and announced he was a trauma surgeon. Although I was fully conscious, he wasted little time pulling on a rubber-glove and burying a finger well past his knuckle inside the hole in my throat. Chris Maguire’s first concern was to ensure I hadn’t severed one of the carotid arteries, an injury, which can result in death by blood loss in four minutes. Instead he diagnosed a lacerated windpipe, located just a couple of centimetres from the carotid arteries. As I’d guessed I was breathing through my neck. It was far from ideal but he instructed the now attentive bystanders that no emergency tracheostomy would be necessary. Reassured by the presence of the surgeon I bent my will towards breathing. The sound of approaching sirens delivered an additional level of calm. You can only imagine my confusion when I turned to see the fire brigade pull up. Apparently in Hawaii the fire department double as paramedics, but by the time the time the emergency serviceman came bounding from the big truck Dr Chris had the situation under control.

Thankfully the ambulance arrived shortly after. Chris was in deep by now and agreed to ride with me. I was still conscious and watched him instruct the paramedics how best to proceed. The last thing I remember was the ambulance medic telling me in a militant tone that he had to, “Take me out…” and “Establish a clear airway passage or it could be bad!”

As I drifted into never-never-land, Col hung on in the front while the driver from Idaho peeled through heavy traffic on the same mega-highway I’d driven along only the night before. A tube had been fed through my mouth, down past the split in my windpipe and into my lungs. Chris periodically squeezed the air bag that was feeding me oxygen. I arrived at Queen's Medical Centre in a stable condition but nobody made any promises.

While Col was left to make the difficult call to my family and girlfriend, I spent five hours on the operating table under the care of three surgeons. This time the doctors had to perform a tracheostomy below the wound so that I could breathe while they stitched up my windpipe.

I woke to the sight of my blood-soaked boardshorts being tossed in the bin and it dawned on me that unlike them, I had been spared. Sure I’d been the victim of a freakish accident but I was also aware that an even more unique series of circumstances had conspired in my survival and I felt very lucky to be alive.

Fortunately my travel insurance saved me from a US medical bill that might have otherwise been enough to buy a house. At present only one of my two vocal chords still works but girls seem to like the gravely timbre of the new voice. I had my first surf back at Sunset two years after the incident. By some strange coincidence Pamela Anderson waved as I walked down the beach. I guess that took my mind off things and I had one of the best surfs of my life on an orange Dick Brewer I borrowed off Stephen Bell who had been in the crowd on the beach the day I was hurt. I’ve surfed there a few times this year and lets just say it’s good to be back. 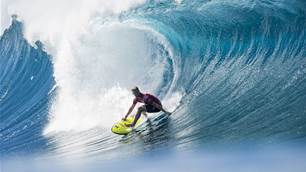